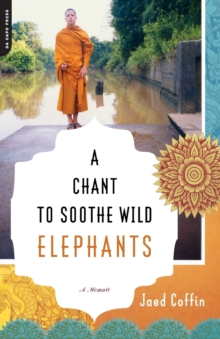 A CHANT TO SOOTHE WILD ELEPHANTS: A MEMOIR

Product Description Six years ago at the age of twenty-one, Jaed Muncharoen Coffin, a half-Thai American man, left New England's privileged Middlebury College to be ordained as a Buddhist monk in his mother's native village of Panomsarakram--thus fulfilling a familial obligation. While addressing the notions of displacement, ethnic identity, and cultural belonging, A Chant to Soothe Wild Elephants chronicles his time at the temple that rain season--receiving alms in the streets in saffron robes; bathing in the canals; learning to meditate in a mountaintop hut; and falling in love with Lek, a beautiful Thai woman who comes to represent the life he can have if he stays. Part armchair travel, part coming-of-age story, this debut work transcends the memoir genre and ushers in a brave new voice in American nonfiction. From Publishers Weekly In this affecting memoir, Coffin relates tales from his childhood and the complications that arise from being the offspring of an interracial couple in the late 1970s. Coffin's father was a U.S. soldier who met his mother in Taiwan during the Vietnam War. Not long after they venture to America to start a new life, Coffin's parents separated and he and his younger sister, Tahnthawan, moved to Maine with their mother. Coffin was taken back to his mother's Taiwanese village several times during his childhood, and, on one occasion, encountered an elderly Buddhist priest who claimed the boy should come and live as a monk. Years later as a university student, he returned to the village to become a monk in the hopes of finding himself and his true identity. He meditated and learned prayers and chants, but often found himself alone in his room, sleeping on the floor next to his Buddha statue until he begins to question whether he is meant for the life of a monk. In heartfelt prose, Coffin beautifully captures his journey, both geographical and internal. (Feb.) Copyright Â© Reed Business Information, a division of Reed Elsevier Inc. All rights reserved. Review Tricycle â€œItâ€™s worth reading this book twice. Once for the storyâ€”absorbing and, at times, amusingâ€”and once more for the poetry: crystalline observations of people and place that float alongside the narrative. What could have been a simple coming-of-age tale is, in Coffinâ€™s hands, a wry, at times lyrical commentary on cultural identity and Buddhist practice.â€? - About the Author Jaed Coffin holds a B.A. in philosophy from Middlebury College and an M.F.A. from the University of Southern Maine's Stonecoast Writing Program. A boxer, sea-kayaker, and lobster fisherman, he lives in Brunswick, Maine.