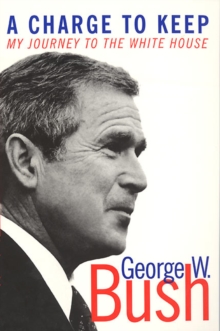 A CHARGE TO KEEP: MY JOURNEY TO THE WHITE HOUSE

Product Description I was not elected to serve one party, but to serve one nation. The president of the United States is the president of every single American, every race and every background. Whether you voted for me or not, I will do my best to serve your interests, and I will work to earn your respect. I will be guided by President Jefferson's sense of purpose: to stand for principle, to be reasonable in manner, and, above all, to do great good for the cause of freedom and harmony. The presidency is more than an honor, it is more than an office. It is a charge to keep, and I will give it my all. --George W. Bush, December 13, 2000, Texas House of Representatives In A Charge to Keep, George W, Bush offers readers a warm, insightful, and honest look at the personal and political experiences that have shaped his values and led to his decision to run for president. The George W. Bush who leaps off these pages has his mother's wit and down-to-earth personality, his father's energy and competitive drive, and his own unique style and philosophy. Written with his long term communications director, Karen Hughes, A Charge to Keep is a revealing look into the background, philosophy, family, and heart of our new president. From Library Journal Despite the subtitle, this book, first published in 1999, does not include any report of the President's 2000 campaign nor the postelection drama of the Florida vote count. Typical of the books that presidential candidates write to introduce themselves to the American public and promote their campaigns, the narrative gives insight into the experiences that shaped Bush's life and his decision to run for president. Co-written with his communications director, Karen Hughes, the book stresses his educational reform successes as governor of Texas and describes faith-based programs supported by the state's agencies as examples of "compassionate conservatism." Bush also offers background and explanations for his decisions on several controversial issues, such as the death penalty and health-care reform. The overall tone of the book projects the "uniter not divider" image. Recommended for public libraries that do not own the 1999 edition. Jill Ortner, SUNY at Buffalo Libs. Copyright 2001 Reed Business Information, Inc. About the Author George W. Bush is the two-time governor of Texas, Commander-in-Chief of our Armed Forces and President of the United States of America. Mickey Herskowitz is the coauthor of several autobiographies, including ones by Dan Rather, Bob Uecker, Howard Cosell, and Nolan Ryan. He lives in Houston, Texas.