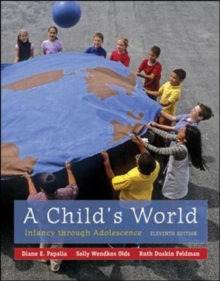 A CHILD'S WORLD: INFANCY THROUGH ADOLESCENCE

Product Description This fully-revised eleventh edition continues to provide the extensive cross-cultural and multicultural coverage, the innovative pedagogical learning system, and the balance between research and real-life applications that have made A Child's World a favorite of students and professors alike. In the warmly-written and engaging style that has become their hallmark, Diane Papalia and Ruth Feldman continue to provide a chronological view of child development; the new edition expands the coverage of cultural and historical influences on development, highlights the latest research in cognitive neuroscience and evolutionary theory, and features a new and improved Visual Assets Database for instructors. About the Author As a professor, Diane E. Papalia has taught thousands of undergraduates at the University of Wisconsin-Madison. She received her bachelorâ€™s degree, majoring in psychology, from Vassar College and both her masterâ€™s degree in child development and family relations and her Ph.D. in life-span developmental psychology from West Virginia University. She has published numerous articles in such professional journals as Human Development, International Journal of Aging and Human Development, Sex Roles, Journal of Experimental Child Psychology and Journal of Gerontology. Most of these papers have dealt with her major research focus, cognitive development from childhood through old age. Ruth Duskin Feldman is an award-winning writer and educator. With Diane E. Papalia and Sally Wendkos Olds, she coauthored the fourth and the seventh through the twelfth editions of Human Development and the eighth through the twelfth editions of A Child's World. She also is coauthor, with Dr. Papalia, Harvey Sterns and Cameron J. Camp, of Adult Development and Aging. A former teacher, she has developed educational materials for all levels from elementary school through college and has prepared ancillaries to accompany the Papalia-Olds books. She is author or coauthor of four books addressed to general readers, including Whatever Happened to the Quiz Kids? Perils and Profits of Growing Up Gifted. She has written for numerous newspapers and magazines and has lectured extensively and made national and local media appearances throughout the United States on education and gifted children. She received her bachelor's degree from Northwestern University, where she was graduated with highest distinction and was elected to Phi Beta Kappa. Sally Wendkos Olds is an award-winning professional writer who has written more than 200 articles in leading magazines and is the author or coauthor of six books addressed to general readers in addition to the three textbooks she has coauthored with Dr. Papalia. Her book The Complete Book of Breastfeeding, a classic since its publication in 1972, was reissued in 1999 in a completely updated and expanded edition; more than 2 million copies are in print. She has spoken widely on the topics of her books and articles to both professional and lay audiences, in person and on television and radio. She received her bachelor's degree from the University of Pennsylvania, where she majored in English literature and minored in psychology. She was elected to Phi Beta Kappa and was graduated summa cum laude.