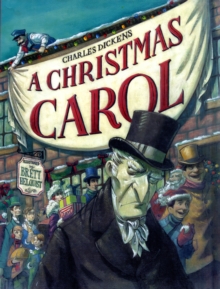 Product Description In this luminous picture book adaptation of Charles Dickens' immortal classic, the story of Ebenezer Scrooge leaps off the page to warm the soul of one and all. Be swept away in an unforgettable Christmas Eve, from Scrooge's first "Bah, humbug!" to the arrival of the Ghost of Christmas Past; from the courage of Tiny Tim to the glory of Christmas morning. Brett Helquist's art bursts with spirit, humor, and an irresistible attention to detail. Here is a treasure for the whole family to share, year after year. A merry Christmas, everyone! From School Library Journal Starred Review. Grade 3 Upâ€“Dickens's cautionary tale of an embittered, stingy old man learning to be a happier, more giving person thanks to the intervention of four ghosts has long been fodder for holiday collections. From its stark opening spread (&MARLEY WAS DEAD) to the final one with its much more cheerful winter scene, this year's version, illustrated in Helquist's darkly comic style, is one of the best. Some of that credit must go to Greenhut, who provided the abridgment. Sacrificing none of Dickens's rich language, this retelling reads beautifully. The artist uses watercolor, pencil, and pastel to create cinematic artwork that contains amusing details; additionally, there are a number of pen-and-ink vignettes that help set the scenes. A winning combination of sparkling prose and exciting art.â€“ Mara Alpert, Los Angeles Public Library END About the Author Charles Dickens (1812-1870) was one of England's greatest writers. Best known for his classic serialized novels, such as Oliver Twist, A Tale of Two Cities, and Great Expectations, Dickens wrote about the London he lived in, the conditions of the poor, and the growing tensions between the classes. He achieved critical and popular international success in his lifetime and was honored with burial in Westminster Abbey. Brett Helquist's celebrated art has graced books from the charming Bedtime for Bear, which he also wrote, to the New York Timesâ€“bestselling A Series of Unfortunate Events by Lemony Snicket to the glorious picture book adaptation of Charles Dickens's A Christmas Carol. He lives with his family in Brooklyn, New York.