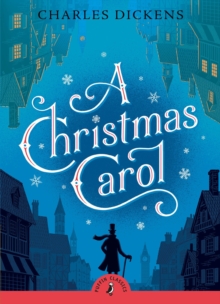 Product Description A Christmas Carol is one of Charles Dickens' most loved books - a true classic and a Christmas time must-read. Ebenezer Scrooge is a mean, miserable, bitter old man with no friends. One cold Christmas Eve, three ghosts take him on a scary journey to show him the error of his nasty ways. By visiting his past, present and future, Scrooge learns to love Christmas and the people all around him. With a light-hearted introduction by bestselling author Anthony Horowitz, creator of the highly successful Alex Rider novels, most recently Snakehead. Charles Dickens (1812-70) is one of the most recognized celebrities of English literature. His imagination, wit, mastery of the language and huge creative output single him out as one of the few people who genuinely deserve to be called genius. He had a poverty-stricken childhood and was determined to improve himself. By his early twenties he found a job as a parliamentary reporter and in his spare time wrote sketches of London life for newspapers and magazines. The publication of Pickwick Papers (1836) brought him the fame and fortune he craved. He wrote many other famous books including Oliver Twist, Great Expectations and A Tale of Two Cities. About the Author Charles Dickens was born on February 7, 1812, in Landport, Portsea, England. He died in Kent on June 9, 1870. The second of eight children of a family continually plagued by debt, the young Dickens came to know not only hunger and privation,but also the horror of the infamous debtorsâ€™ prison and the evils of child labor. A turn of fortune in the shape of a legacy brought release from the nightmare of prison and â€œslaveâ€ factories and afforded Dickens the opportunity of two yearsâ€™ formal schooling at Wellington House Academy. He worked as an attorneyâ€™s clerk and newspaper reporter until his Sketches by Boz (1836) and The Pickwick Papers (1837) brought him the amazing and instant success that was to be his for the remainder of his life. In later years, the pressure of serial writing, editorial duties, lectures, and social commitments led to his separation from Catherine Hogarth after twenty-three years of marriage. It also hastened his death at the age of fifty-eight, when he was characteristically engaged in a multitude of work. Excerpt. Â© Reprinted by permission. All rights reserved. MARLEY was dead: to begin with. There is no doubt whatever about that. The register of his burial was signed by the clergyman, the clerk, the undertaker, and the chief mourner. Scrooge signed it: and Scrooge's name was good upon 'Change, for anything he chose to put his hand to. Old Marley was as dead as a door-nail. Mind! I don't mean to say that I know, of my own knowledge, what there is particularly dead about a door-nail. I might have been inclined, myself, to regard a coffin-nail as the deadest piece of ironmongery in the trade. But the wisdom of our ancestors is in the simile; and my unhallowed hands shall not disturb it, or the Country's done for. You will therefore permit me to repeat, emphatically, that Marley was as dead as a door-nail. Scrooge knew he was dead? Of course he did. How could it be otherwise? Scrooge and he were partners for I don't know how many years. Scrooge was his sole executor, his sole administrator, his sole assign, his sole residuary legatee, his sole friend and sole mourner. And even Scrooge was not so dreadfully cut up by the sad event, but that he was an excellent man of business on the very day of the funeral, and solemnised it with an undoubted bargain. The mention of Marley's funeral brings me back to the point I started from. There is no doubt that Marley was dead. This must be distinctly understood, or nothing wonderful can come of the story I am going to relate. If we were not perfectly convinced that Hamlet's Father died before the play began, there would be nothing more remarkable in his taking a stroll at night, in an easterly wind, upon his own ramparts, than there would be in