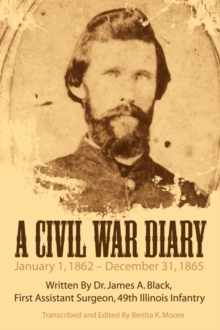 Assistant Surgeon James A. Black takes the reader on a seldom traveled journey--a fourteen hundred sixty-one day excursion--as he participates in the American Civil War. During his sojourn the Union soldier openly shares his observations, his joys, his concerns, and his frustrations, as he provides the reader with tremendous insight into the daily lives of soldiers in their camps and on their campaigns some one hundred fifty years ago. Black and a contingency of Southern Illinois men enlisted in the Union Army October 6, 1861. The 49th Illinois Infantry Regiment was mustered into service December 31, 1861, briefly trained at Camp Butler, near Springfield, Illinois, and was engaged in combat by February, 1862. The regiment remained active in the Western Theatre of action for the duration of the war. Although the diary does not offer revolutionary revelations about the war or its generals, it does present interesting and revealing perceptions about the conflict, especially concerning the impact on soldiers involved in prolonged military engagement. Black?s perspective as a Civil War soldier is unique in many ways. For the first year he wrote with the view of an enlisted infantryman, while the last three years he viewed events from the eyes of a commissioned medical officer. In addition, James Black, a good soldier, was a strong believer in the Union cause, a religious man, and a moralist. In many ways his thoughts reflect the times and yet many thoughts do not necessarily follow conventional Civil War wisdom. The diary is completely unabridged and void of interpretation or comment by scholars. Simply, the diary is James? personal story as he lived it.