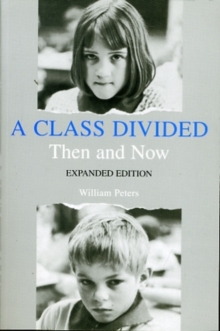 A CLASS DIVIDED, THEN AND NOW, EXPANDED EDITION

Product Description For two days after Martin Luther King, Jr. was killed, Jane Elliott, a third-grade teacher in Riceville, Iowa, gave her pupils a unique lesson in discrimination. The first day, brown-eyed children were declared â€œsuperior,â€ given special privileges, and encouraged to discriminate against their suddenly â€œinferiorâ€ blue-eyed classmates. The next day, roles were reversed. What happened astonished both students and teacher. On both days, children labeled â€œinferiorâ€ took on the look and behavior of genuinely inferior students; they did inferior work. â€œSuperiorâ€ students excelled in their work and delighted in discriminating against their erstwhile friends. Jane Elliott repeated the exercise with succeeding classes, and the third year, it was filmed for an award-winning television documentary, â€œThe Eye of the Storm.â€ The original edition of A Class Divided, written by William Peters, the producer-director-writer of the documentary, expanded on the story revealed in the television program. This new edition of A Class Divided continues the story of Jane Elliott and her sixteen third-graders of 1970, eleven of whom returned to Riceville in 1984 for a reunion with their former teacher. In the new chapters, Peters reports on that meeting and its evidence that the long-ago lesson has had a profound and enduring effect on the studentsâ€™ lives and attitudes?indeed, on the way they are raising their own children. Peters also relates the surprising reactions of employees of the Iowa Department of Corrections and other adults to the same exercise. The studentsâ€™ reunion and the session with adult Corrections workers were covered in Petersâ€™ recent Emmy-Award winning documentary, â€œA Class Divided.â€ This new edition of A Class Divided expands significantly on the material covered in both documentaries. â€œThis exceedingly well-written book should be on the reading list of virtually all teacher education classes.â€?John I. Goodlad, author of A Place Called School Review "As a document, [it] is moving and instructive."?Anthony Borden, Nation "This book is not only a wonderful study of educational psychology. It reads like a novel. I recommend it highly."?Carl Kreider, Mennonite Weekly Review "A very interesting and easily readable book. . . . A Class Divided could be very helpful on an individual level for personal reflection. It would be equally useful for discussion in teacher training classes and for professional development workshops for members of the helping professions."?Janice Hale-Benson, Young Children "Reading this book is excellent preparation for becoming inoculated against racism."â€”George Henderson, Educational Leadership "[A] small but thought-provoking volume. . . . Unlike many works on discrimination, this is a 'quiet' book with limited goals and modest claims."â€”Anita W. Graber, Readings "This exceedingly well-written book should be on the reading list of virtually all teacher education classes."?John I. Goodlad, author of A Place Called School