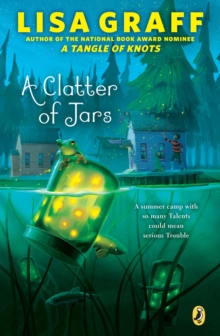 A CLATTER OF JARS

Product Description National Book Award nominee Lisa Graff returns readers to the magical world of A Tangle of Knots , where a camp for Talented kids just might be a recipe for disaster. It's summertime and everyone is heading off to camp. For kids with special Talents, the place to be is Camp Atropos, to sing songs by the campfire, practice for the Talent show, and take some nice long dips in the lake. But what the kids don't realize is that they've been gathered for a reason--one that the camp's director wants to keep hidden at all costs. Meanwhile, a jar filled with a mysterious Talent has been dropped to the bottom of the lake, and strange things have begun to happen. Dozens of seemingly empty jars have been washing up on the shoreline, Talents are getting swapped, and memories are ripped from one camper's head and placed into another. Almost no one knows why. Review Praise for Lisa Graff's novels: A Clatter of Jars: "Graff is a master of the magical realism genre, and this offering is worthy of a spot in any middle grade collection."â€” School Library Journal This highly satisfying sequel to A Tangle of Knots will not only sate the appetites of readers already familiar with Graffâ€™s fantasy world, but it will also provide a fine entry point for new readers as well . . . Â Graffâ€™s vivid character development and world building makes for tight plotting and nicely negotiable complexity. A great fit for fans of Louis Sacharâ€™s Holes."-- Booklist"Each character struggles with truth, familial love, and acceptance, as Talents are lost and found, relinquished and stolen,borrowed and returned. And then thereâ€™s Fate, who also raises her head when leastexpected, reminding readers that itâ€™s not the talents weâ€™re given but what we makeof them that creates happiness ."--The Horn Book"Readers will love the inventivenessâ€”and the sadnessâ€”of every storyline . . . Â this is a novel that rewards a secondâ€”or even a thirdâ€”reading."-- Kirkus Reviews "[A] warmhearted companion to A Tangle of Knots . . .Â Graff brings the plot threads to a satisfying resolution."-- Publishers Weekly "Graffâ€™s prose and plot construction is as pleasing as ever, andÂ  A Clatter of JarsÂ will appeal to a wide range of readers."â€” Bookpage Lost in the Sun * "Graff writes with stunning insight into boyhood and humanity, allowing Trent to speak for himself in a pained, honest narration. Investing Trent with all the tragic frailty of Holden Caulfield, Graff tackles issues of loss, isolation, and rage without apology. Graff consistently demonstrates why character-driven novels can live from generation to generation, and here she offers a story that can survive for many school years to come."â€” Kirkus ReviewsÂ *STARRED* * "Graff creates layered, vulnerable characters that are worth getting to know and routing for. Narrated by the moody, sarcastic Trent, the story never buckles beneath his troubles, and it finds wings once he can see beyond them. Pranks,Â  The SandlotÂ reenactments, sports talk, and donuts are in plentiful supply, adding dashes of levity at the right moments. The bookâ€™s real magic is found in simple acts like watering plants and learning when to listen and when to just tip your head back and scream at the sky."â€” BooklistÂ *STARRED* * "In an ambitious and gracefully executed story, GraffÂ covers a lot of emotional ground, empathically tracing Trentâ€™s efforts to deal with a horrible, inexplicable accident and to heal the relationships that have become collateral damage along the way."â€” Publishers WeeklyÂ *STARRED* Â  Â Â  * "Weighty matters deftly handled with humor and grace will give this book wide appeal."â€” School Library JournalÂ *STARRED* Â  * "Characterization is thoughtful: Graff is highly sensitive to a sixth-grade boyâ€™s limited emotional savvy and lack of tools to deal with this kind of pain, and Fallon is believably sympathetic."â€” BCCBÂ *STARRED REVIEW* Â  â€œInÂ  Lost in the Sun, Trent decides that he will speak the truth: that pain and anger and loss are no