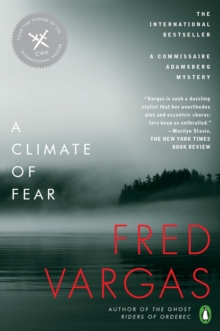 A CLIMATE OF FEAR (A COMMISSAIRE ADAMSBERG MYSTERY)

Product Description From the #1 bestselling French author and four-time winner of the Crime Writersâ€™ Associationâ€™s International Dagger Award "French crime queen's new mysteryâ€”her best yet."â€”The Sunday Times ("Must Reads")â€œAdamsberg is a terrific creation and his team of misfits a joy to watch in action.â€â€”Peter Robinson,Â New York TimesÂ bestselling author of the Inspector Banks series Â  A woman is found murdered in her bathtub, and the murder has been made to look like a suicide. But a strange symbol found at the crime scene leads the local police to call Commissaire Adamsberg and his team. Â  When the symbol is found near the body of a second disguised suicide, a pattern begins to emerge: both victims were part of a disastrous expedition to Iceland over ten years ago where a group of tourists found themselves trapped on a deserted island for two weeks, surrounded by a thick, impenetrable fog rumored to be summoned by an ancient local demon. Two of them didnâ€™t make it back alive. But how are the deaths linked to the secretive Association for the Study of the Writings of Maximilien Robespierre? And what does the mysterious symbol signify? Review "[ A Climate of Fear]Â delights with its interesting characters, engaging dialogue, and infectious sense of curiosity about the lives of others.â€â€” Kirkus Reviews "Captivating...Â Vargas keeps introducing unexpected, fascinating new plot elements, even as the action totters on the brink of absurdity."â€” Publishers Weekly Praise for Fred Vargas and her Commissaire Adamsberg MysteriesÂ  â€œVargas writes with the startling imagery and absurdist wit of a latter-day Anouilh, about fey characters who live in a wonderful bohemian world that never was but should have been.â€â€” The New York Times Book ReviewÂ  â€œA wildly imaginative series.â€â€” The New York Times Â  â€œSpry, ironic, yet fully engaged with the horror of contemporary realityâ€â€” Los Angeles Times Â  Â â€œIt's a full, rich and strange plate.â€â€” Seattle Times Â  â€œ[A] high degree of intelligence, sophistication and perversity informs [Vargasâ€™] fictionâ€¦I continue to be delighted by the workings of [her] imagination. Itâ€™s a tangled web she weaves, and a hard one to escape.â€â€”Patrick Anderson,Â  The Washington PostÂ  Â  â€œFew crime stories are as apt to leave a reader wondering so ardently: Who dunnit?...Vargasâ€™ characters are like something out of a fairy tale â€“ eternal opposites, ever-renewing archetypes despite their fresh adventures each time. Thatâ€™s why each novelâ€™s opening feels new.â€â€” The Philadelphia InquirerÂ  Â  â€œAnyone who enjoys kooky characters and intricate detail will happily follow Vargas along.â€â€” Entertainment Weekly â€œReaders should settle in to be unsettled. Delight is found not so much in the details of plot as in the oddities of character. The crime, the suspects, and the commissaire are all pleasantly off-kilter and equally baffling. A definite pick for Francophile mystery buffs who also enjoy Georges Simenon's Maigret series and Pierre Magnan ( Death in the Truffle Wood).â€â€” Library Journal Â  â€œAs droll and fascinating asÂ  la ville lumiÃ¨reÂ itself.â€â€” Kirkus Reviews Â  Â  â€œAdamsberg, always an intuitive sleuth rather than a rational one, is the perfect hero for a series where reality is always a moving target.â€â€” BooklistÂ  "Worlds that closely resemble the real one, except that beliefs, tales, apparitions, even professions, from the Middle Ages fit in seamlessly."â€” The Philadelphia Inquirer Â  â€œVargas is, by some distance, the hottest property in contemporary crime fiction.â€â€” The GuardianÂ (London) About the Author Fred Vargas is an archaeologist, a historian, and an internationally bestselling author. She lives in Paris.