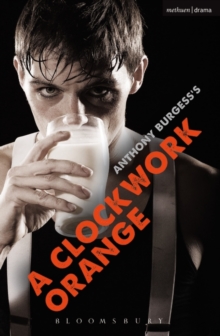 Product Description Anthony Burgess's stage play of his infamous cult novel and film of the same name.Alex and his vicious teenage gang revel in horrific violence, mugging and gang rape. Alex also revels in the music of Beethoven. The Gang communicates in a language which is as complicated as their actions. When a drug-fuelled night of fun ends in murder, Alex is finally busted and banged up. He is given a choice - be brainwashed into good citizenship and set free, or face a lifetime inside. Anthony Burgess's play with music, based on his own provocative 1962 novella of the same name, was first published in 1987. A Clockwork Orange was made into a film classic by Stanley Kubrick in 1971 and was dramatizes by the RSC in 1990. From the Back Cover Biographical play based on the life of Sid James, star British movie series Carry-On. About the Author Anthony Burgess was born in Manchester in 1917. From 1954 to 1960 he was stationed in Malaysia as an education officer and during this time he started writing The Malayan Trilogy. He was an author, poet, playwright, composer, linguist, translator and critic. Diagnosed with an inoperable brain tumour in 1959, Burgess became a full-time writer and went on to write a book a year up until his death in 1993. His many works include: The Complete Enderby, Tremor of Intent and The Kingdom of the Wicked, as well as works for the stage such as Blooms of Dublin: A Musical Play Based On James Joyce's Ulysses (1986), and an adaptation of his own novel, A Clockwork Orange, produced in 1987.