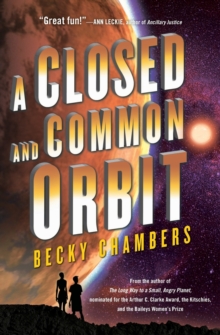 A CLOSED AND COMMON ORBIT (WAYFARERS)

Product Description Winner of the Hugo Award for Best Series! A Publishers Weekly "Best Books of 2017" pick! Nominated for the 2017 Hugo Award for Best Novel! Shortlisted for the 2017 Arthur C. Clarke Award! Winner of the Prix Julia-Verlanger! Embark on an exciting, adventurous, and dangerous journey through the galaxy with the motley crew of the spaceship Wayfarer in this fun and heart-warming space operaâ€”the sequel to the acclaimed The Long Way to a Small, Angry Planet. Lovelace was once merely a shipâ€™s artificial intelligence. When she wakes up in a new body, following a total system shut-down and reboot, she has no memory of what came before. As Lovelace learns to negotiate the universe and discover who she is, she makes friends with Pepper, an excitable engineer, whoâ€™s determined to help her learn and grow. Together, Pepper and Lovey will discover that no matter how vast space is, two people can fill it together. The Long Way to a Small, Angry Planet introduced readers to the incredible world of Rosemary Harper, a young woman with a restless soul and secrets to keep. When she joined the crew of the Wayfarer, an intergalactic ship, she got more than she bargained forâ€”and learned to live with, and love, her rag-tag collection of crewmates. A Closed and Common Orbit is the stand-alone sequel to that beloved debut novel, and is perfect for fans of Firefly, Joss Whedon, Mass Effect, and Star Wars. Review â€œAs with her amazing debut, the power of Chamberâ€™s second space opera is in her appealing characters [...] Her protagonists might not all be human, but they possess more humanity than mostâ€ ( Library JournalÂ (starred review)) â€œChambers uses her considerable talent to take a more focused and contained look at a gut-wrenching story of self-determination and personal autonomy [...] No matter what beautiful and strange world Chambers takes us to, we can count on her to lead with humor and heart.â€ (RT Book Reviews (4 1/2 stars)) â€œWarm, engaging, properly science-fictional, A Closed and Common Orbit is a very likable novel indeed.â€ (The Guardian) â€œ A Closed and Common Orbit may be smaller in scope than the book before it, but in its focus and its force, in the sheer delight it takes in the discoveries it documents, itâ€™s as fine and as fantastical and as fun as Chambersâ€™ absolute darling of a debut.â€ (Tor.com) â€œAs good, smart and satisfying as its predecessor...If there was such a thing as a Cosy Space Opera subgenre of Speculative Fiction, Becky Chambersâ€™ series would likely be listed alongside the equally excellentÂ  On a Red Station, DriftingÂ by Aliette de Bodard andÂ  BintiÂ by Nnedi Okorafor.â€ (Book Smugglers) â€œWhile most sequels feel the need to go bigger and bolder,Â  OrbitÂ is a more intimate story than its predecessor, exploring trust, the mind/brain paradox, and unease with oneâ€™s body, while examining the ways someone without a family makes their way in the world and forms their own connections.â€ (AV Club) â€œThe vibrant lines drawn between lives prove as compelling as laser battles and widescreen explosions. If you yearn for science fiction with heart, youâ€™ll be hard-pressed to find a better candidate this stellar novel.â€ (B&N Sci-Fi and Fantasy Blog) â€œChambers Wayfarers series is the feel-good science fiction series you were looking for. Depressing dystopias got you down? Hereâ€™s the antidote [...] This is optimistic science fiction for those who grew up on Original SeriesÂ  Star Trek.â€ (Pop Verse) â€œFor any of us, life as we think we know it can change at any time. A Closed and Common Orbit simply reminds us that, in a universe of immense and wondrous possibilities, thereâ€™s no shame in finding oneself a novice here anew.â€ (Strange Horizons) â€œHumane and alien, adventurous and thoughtful, vast in its imagination and wonderfully personal in the characters it builds. But above all else, it is joyously written and a joy to read.â€ (Claire North, author of The First Fifteen Lives of Harry August) From the Back Cover E