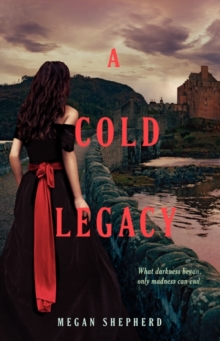 Product Description With inspiration from Mary Shelley's Frankensteinâ€”and perfect for fans of Libba Brayâ€”this breathless conclusion to the Madman's Daughter trilogy explores the things we'll sacrifice to save those we loveâ€¦even our own humanity. After killing the men who tried to steal her father's research, Juliet and her friends have escaped to a remote estate on the Scottish moors. Owned by the enigmatic Elizabeth von Stein, the mansion is full of mysteries and unexplained oddities: dead bodies in the basement, secret passages, and fortune tellers who seem to know Juliet's secrets. Though it appears to be a safe haven, Juliet fears new dangers may be present within the manor's walls. Then Juliet uncovers the truth about the manor's long history of scientific experimentationâ€”and her own intended role in itâ€”forcing her to determine where the line falls between right and wrong, life and death, magic and science, and promises and secrets. And she must decide if she'll follow her father's dark footsteps or her mother's tragic ones, or whether she'll make her own. From School Library Journal Gr 9 Upâ€”The final volume of the "Madman's Daughter" series (HarperCollins) accomplishes something too often lacking in trilogiesâ€”a third volume that is as compelling and well-written as the first installment. In this entry inspired by Mary Shelley's Frankenstein, Juliet, Lucy, Montgomery, Balthazar, and Edward have escaped from their pursuers to the Scottish estate of Juliet's friend and benefactor, Elizabeth von Stein. They find the isolated estate inhabited by a number of young women and girls, "wards" of Elizabeth, and one very strange male child named Hensley, Elizabeth's son. Juliet also discovers that the secrets of the rich woman's ancestor Victor Frankenstein have been preserved by the family, and with no legitimate heirs, Juliet has been chosen to receive the knowledge of "Perpetual Anatomy." The heroine wonders if she can use this knowledge to save Edward, but the complicated process is fraught with danger. Intrigue, the growing fear of discovery by their pursuers, romances between Elizabeth and Edward as well as Juliet and Montgomery, danger from within the house and its inhabitants, and secrets abound. In addition to the outer turmoil, Juliet continues to worry whether or not as her father's daughter she, too, has the "madness" gene. The skillfully drawn and well-developed characters face their emotional upheavals and outside dangers with aplomb. Shepherd's adroit weaving of the Frankenstein story line into the already complex world of Dr. Moreau's daughter, brings an exciting new twist and a satisfactory ending to the trilogy. Fast-paced and romantic, this page-turning volume results in mixed emotionsâ€”contentment with the ending, but still a desire for more.â€”Janet Hilbun, University of North Texas Review â€œFast-paced and romantic, this page-turning volume [is] . . . a satisfactory ending to the trilogy.â€ (School Library Journal (starred review)) â€œRivetingâ€¦A creepy and compelling tale.â€ ( Kirkus Reviews) Praise for HER DARK CURIOSITY: â€œUnexpected twists and a cliffhanger ending that should leave [readers] craving more.â€ ( Publishers Weekly) Praise for THE MADMANâ€™S DAUGHTER: â€œThe fast-paced book is rife with excitement, romance, and intrigue.â€ (School Library Journal (starred review)) Praise for THE MADMANâ€™S DAUGHTER: â€œA deft twist on a familiar classic, THE MADMANâ€™S DAUGHTER has the best of everything: beautiful writing, breakneck pacing, a pulse-pounding mystery, and an irresistible romance.â€ (Carrie Ryan, New York Times bestselling author of The Forest of Hands and Teeth series) Praise for THE MADMANâ€™S DAUGHTER: â€œRomantic, haunting, and full of spine-tingling thrills, THE MADMANâ€™S DAUGHTER kept me reading late into the night.â€ (Veronica Rossi, New York Times bestselling author of UNDER THE NEVER SKY) From the Back Cover After killing the men who tried to steal her father's research, Julietâ€”along with Montgomery