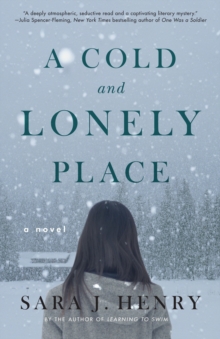 A COLD AND LONELY PLACE: A NOVEL

Product Description A riveting novel from the author of the critically acclaimedÂ Learning to Swim and an Anthony Award nominee for Best NovelÂ While she's watching the crew build the Winter Carnival ice palace, Troy Chance sees a body encased in the frozen lakeâ€”a man she recognizes as the boyfriend ofÂ one of her roommates. When she is assigned to write a feature on his life and mysterious death, TroyÂ discovers he was the missing son of a wealthy Connecticut family. Trying to unravel what brought him to this Adirondack village, she joins forces with his girlfriend and his sister, who comes to town to find answers. But as Troy digs deeper, itâ€™s clear someone doesnâ€™t want the investigation to continue. And when she uncovers long-buried secrets that could shatter the serenity of the small town and many peopleâ€™s lives, sheâ€™ll be forced to decide how far her own loyalties reach.Â Â â€œSara J. Henry brilliantly draws us into a terrifying but ultimately affirmative novel in which love, friendship, and the shining truth about who we really are redeem an otherwise hopeless universe.â€ â€”Howard Frank Mosher, award-winning author of Godâ€™s Kingdom Review â€œFeaturing an independent and immensely likable lead, riffing on the complicated nature of friendship, and boasting a solidly plotted mystery, this may well appeal to fans of Gillian Flynn.â€Â â€”Booklistâ€œSara J. Henry's stellar debut,Â Learning to Swim, collared multiple major mystery awards. NowÂ A Cold and Lonely PlaceÂ showcases Henry's powerful new voice. Set in the Adirondack winter, it is both a deeply atmospheric, seductive read and a captivating literary mystery. Put this one on your must-read list!â€Â â€”Julia Spencer-Fleming, author ofÂ Through the Evil Daysâ€œThere is a mystery at the cold and lonely heart of this book, but first and foremost, itâ€™s a poignant and haunting story about Troyâ€™s search for the truth behind a young manâ€™s lifeâ€¦ This is a powerful, emotional journey for Troy, but ultimately a hopeful one, as she uncovers the stories behind one young manâ€™s traumatic childhood, stories that will finally redeem him.â€ â€”BookPageâ€œ[The] sense of severing all previous ties and never truly getting close to people permeates Sara J. Henry's insightful second novel.... Henry explores the complicated nature of relationships while delivering a suspenseful novel full of unpredictable twists.â€Â â€”South Florida Sun Sentinelâ€œA chilling mystery about families and friendships.â€ â€”Parkersburg News and Sentinel"[A] haunting follow-up to her Agatha-winning debut, Learning to Swim ...Â Adding considerably to the compulsively readable mystery that unfolds â€¦ is Henry's bone-deep sense of this terribly beautiful place." â€”Publishers Weekly"Henry brilliantly draws us into a terrifying but ultimately affirmative novel in which, once again, love, friendship, and the shining truth about who we really are redeems an otherwise hopeless universe." â€”Howard Frank Mosher, author of The Great Northern Express About the Author SARA J. HENRY's first novel, Learning to Swim, won the Anthony, Agatha, and Mary Higgins Clark Awards, was a Target Emerging Author pick, and was named one of Best Books of 2011 by the Boston Globe. Her second novel, A Cold and Lonely Place, is an Anthony award nominee for Best Novel and was a Reader's Digest Select Books choice. She has written for Prevention, Adirondack Life, Bicycling, Triathlete, and other magazines, was an editor at Rodale Books and Women's Sports & Fitness magazine, and was a newspaper and magazine editor. A native of Oak Ridge, Tennessee, Sara lives in Vermont. Visit www.SaraJHenry.com. Excerpt. Â© Reprinted by permission. All rights reserved. chapter 1 We could feel the reverberation of the ice-cutting machine through the frozen lake beneath our feet. Matt Boudoin was telling me this would be the best ice palace ever, and I was nodding, because of course every year the palace seems better than the one the year before. At the same moment, he stopped talking and I stopped n