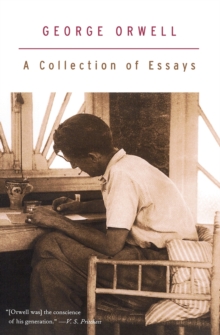 A COLLECTION OF ESSAYS

Product Description George Orwell's collected nonfiction, written in the clear-eyed and uncompromising style that earned him a critical following   One of the most thought-provoking and vivid essayists of the twentieth century, George Orwell fought the injustices of his time with singular vigor through pen and paper. In this selection of essays, he ranges from reflections on his boyhood schooling and the profession of writing to his views on the Spanish Civil War and British imperialism. The pieces collected here include the relatively unfamiliar and the more celebrated, making it an ideal compilation for both new and dedicated readers of Orwell's work. Amazon.com Review Imagine any of today's writers of "creative nonfiction" dispatching a rogue elephant before an audience of several thousand. Now, imagine the essay that would result. Can we say "narcissism"? As part of the Imperial Police in Burma, George Orwell actually found himself aiming the gun, and his record--first published in 1936--comprises eight of the highest voltage pages of English prose you'll ever read. In "Shooting an Elephant," Orwell illumines the shoddy recesses of his own character, illustrates the morally corrupting nature of imperialism, and indicts you, the reader, in the creature's death, a process so vividly reported it's likely to show up in your nightmares ever after. "The owner was furious, but he was only an Indian and could do nothing.... Among the Europeans opinion was divided. The older men said I was right, the younger men said it was a damn shame to shoot an elephant for killing a coolie, because an elephant was worth much more than any damn Coringhee coolie." This essay alone would be worth the cover price, and the dozen other pieces collected here prove that, given the right thinker/writer, today's journalism actually can become tomorrow's literature. "The Art of Donald McGill," ostensibly an appreciation of the jokey, vaguely obscene illustrated postcards beloved of the working classes, uses the lens of popular culture to examine the battle lines and rules of engagement in the war of the sexes, circa 1941. "Politics and the English Language" is a prose working-out of Orwell's perceptions about the slippery relationship of word and thought that becomes a key premise of 1984. "Looking Back on the Spanish War" is as clear-eyed a veteran's memoir of the nature of war as you're likely to find, and Orwell's long ruminations on the wildly popular "good bad" writers Charles Dickens and Rudyard Kipling showcase his singular virtues--searing honesty and independent thinking. From English boarding schools to Gandhi's character to an early appreciation of Henry Miller's Tropic of Cancer, these pieces give an idiosyncratic tour of the first half of the passing century in the company of an articulate and engaged guide. Don't let the idea that Orwell is an "important" writer put you off reading him. He's really too good, and too human, to miss. --Joyce Thompson About the Author GEORGE ORWELL (1903â€“1950)Â was born in India and served with the Imperial Police in Burma before joining the Republican Army in the Spanish Civil War. Orwell was the author of six novelsÂ as well as numerous essays and nonfiction works.