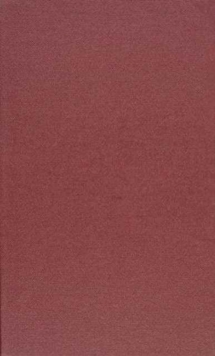 A COLLECTION OF POEMS BY SEVERAL HANDS (CULTURAL FORMATIONS: THE EIGHTEENTH CENTURY)

Product Description This was the best-selling poetry anthology of the eighteenth century, edited by the most celebrated publisher of the era, Alexander Pope's protege, Robert Dodsley. It includes poems by Samuel Johnson, Thomas Gray, David Garrick, Lady Mary Wortley Montague, Horace Walpole, Joseph and Thomas Warton, James Thomson, Elizabeth Carter, Pope himself, and many others. The Collection of Poems is an invaluable index of literary culture in the eighteenth century, and yet despite its great popularity and influence, it has not been in print for more than two hundred years. Review 'It is most appropriate...that Michael Suarez and Routledge bring us this first reprinting of Dodsley's Collection in over 200 years...Because the original volumes have long since been absorbed by private and institutional libraries, this handsome edition once more makes available on the open market...the poetical miscellany that played such a central role in capturing and defining the fashionable taste in poetry during the last half of the eighteenth century. What is more, the decision to provide a facsimile edition affords modern users not only the flavour of the original but the assurance of absolute textual fidelity.' - Times Literary Supplement 'Suarez's introduction is especially valuable, for it explores uncharted ground, discovering new material and leading to fresh insights.' - Times Literary Supplement