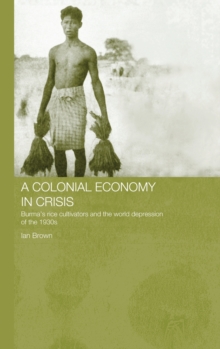 A COLONIAL ECONOMY IN CRISIS: BURMA'S RICE CULTIVATORS AND THE WORLD DEPRESSION OF THE 1930S (ROUTLEDGE STUDIES IN THE MODERN HISTORY OF ASIA)

Product Description The book challenges the orthodox argument that rural populations which abandoned self-sufficiency to become single commodity producers, and were supposedly very vulnerable to the commodity price collapse of the 1930s Depression, did not suffer as much as has been supposed. It shows how the effects of the depression were complicated, varying between regions, between different kinds of economic actors, and over time, and shows how the 'victims' of the depression were not passive, working imaginatively to mitigate their circumstances. About the Author Ian Brown is Professor of the Economic History of South East Asia at the School of Oriental and African Studies, London. He is the author of Economic Change in South-East Asia, c.1830-1980, and he has also published extensively on the economy of Siam in the late nineteenth and early twentieth century, and on the impact of the world depression of the 1930s on the economies of South East Asia. He is currently working on a history of the prison in colonial Burma.