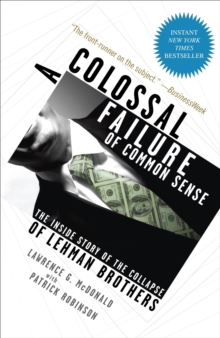 A COLOSSAL FAILURE OF COMMON SENSE: THE INSIDE STORY OF THE COLLAPSE OF LEHMAN BROTHERS

Product Description One of the biggest questions of the financial crisis has not been answered until now: What happened at Lehman Brothers and why was it allowed to fail, with aftershocks that rocked the global economy? In this news-making, often astonishing book, a former Lehman Brothers Vice President gives us the straight answersâ€”right from the belly of the beast. In A Colossal Failure of Common Sense, Larry McDonald, a Wall Street insider, reveals, the culture and unspoken rules of the game like no book has ever done. The book is couched in the very human story of Larry McDonaldâ€™s Horatio Alger-like rise from a Massachusetts â€œgateway to nowhereâ€ housing project to the New York headquarters of Lehman Brothers, home of one of the worldâ€™s toughest trading floors. Â  We get a close-up view of the participants in the Lehman collapse, especially those who saw it coming with a helpless, angry certainty. We meet the Brahmins at the top, whose reckless, pedal-to-the-floor addiction to growth finally demolished the nationâ€™ s oldest investment bank. The Wall Street we encounter here is a ruthless place, where brilliance, arrogance, ambition, greed, capacity for relentless toil, and other human traits combine in a potent mix that sometimes fuels prosperity but occasionally destroys it. Â  The full significance of the dissolution of Lehman Brothers remains to be measured. But this much is certain: it was a devastating blow to Americaâ€™sâ€”and the worldâ€™sâ€”financial system. And it need not have happened. This is the story of why it did. Review â€œ...gives the readers a visceral sense of what it was like to work at Lehman Brothers and the fateful decisions and events that led to the companyâ€™s death spiral...â€ â€”Michiko Kakutani, The New York Times â€œHighly readableâ€¦ A Colossal Failure of Common SenseÂ largely rings true. It expresses the anger that many former Lehman employees still feel toward Mr. Fuld. And it convincingly characterizes the investment bank as a house divided against itself, between the bears who had foreseen bubbles and the bulls who wrongly believed that this time was different.â€ â€”The Economist â€œ... describes a CEO Â­acting as if his firm was too big to fail.â€ â€”Wall Street Journal â€œ...poignantly told...from an insider [who] witnessed, often in amazement and disgust, the corporate dysfunction and hubristic leadership that led to [Lehmanâ€™s] demise.â€ â€”BusinessWeek â€œ...engaging and even funny.â€ â€”Fortune About the Author LAWRENCE G. McDONALD is a managing director of Pangea Capital Management LP. He was, until 2008, vice president of distressed debt and convertible securities trading at Lehman Brothers. He ran an extremely successful joint venture between the firmâ€™s fixed income and equity divisions and was one of Lehmanâ€™s most consistently profitable traders. McDonald is also cofounder of Convertbond.com, named by Forbes magazine as â€œBest of the Webâ€ from 2000 to 2003, specifically citing it as the Webâ€™s premier source for convertible securities information, valuation, and news. Â  PATRICK ROBINSON wrote Lone Survivor with the U.S. Navy SEAL Marcus Luttrell. Excerpt. Â© Reprinted by permission. All rights reserved. Prologue Â  I still live just a few city blocks away from the old Lehman Brothers headquarters at 745 Seventh Avenueâ€”six blocks, and about ten thousand years. I still walk past it two or three times a week, and each time I try to look forward, south toward Wall Street. And I always resolve to keep walking, glancing neither left nor right, locking out the memories. But I always stop. Â  And I see again the light blue livery of Barclays Capital, which representsâ€”for me, at leastâ€”the flag of an impostor, a pale substitute for the swashbuckling banner that for 158 years was slashed above the entrance to the greatest merchant bank Wall Street ever knew: Lehman Brothers. Â  It was only the fourth largest. But its traditions were those of a banking warriorâ€”the brilliant finance house that had