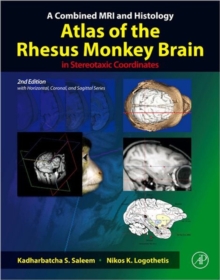 Product Description A Combined MRI and Histology Atlas of the Rhesus Monkey Brain in Stereotaxic Coordinates, Second EditionÂ maps the detailed architectonic subdivisions of the cortical and subcortical areas in the macaque monkey brain using high-resolution magnetic resonance (MR) images and the corresponding histology sections in the same animal. This edition of the atlas is unlike anything else available as it includes the detailed cyto- and chemoarchitectonic delineations of the brain areas in all three planes of sections (horizontal, coronal, and sagittal) that are derived from the same animal. This is a significant progress because in functional imaging studies, such as fMRI, both the horizontal and sagittal planes of sections are often the preferred planes given that multiple functionally active regions can be visualized simultaneously in a single horizontal or sagittal section. This combined MRI and histology atlas is designed to provide an easy-to-use reference for anatomical and physiological studies in macaque monkeys, and in functional-imaging studies in human and non-human primates using fMRI and PET. Review "This atlas is quite big (11x14"), which allows large-scale presentation of images and diagrams, and thorough labeling. This second edition reference is for researchers doing studies on macaque monkeys as well as other non-human primates and humans using fMRI and PET. Building on the first edition, the second is enhanced with horizontal, coronal, and sagittal planes of sections; indication from MRI sections of variability between individuals; and mapping of vasculature, as well as other updates." --Reference and Research Book News, February 2013 "This 2nd edition of Saleem and Logothetisâ€™s atlas of the rhesus monkey brain in stereotaxic coordinates far surpasses their path-breaking 1st edition, which showed not only the cytoarchitectural divisions of the cortex but also its chemoarchitecture and MR images in both coronal and horizontal sections. Added now are a sagittal series through the same brain, as well as fiber tracts, blood vessels, and MRI sections of several other monkeys to illustrate individual variation. Whether or not you have the 1st edition, the splendid 2nd is a must."--Dr. Mortimer Mishkin, Lab Neuropsychol, National Institute of Mental Health (NIMH-NIH) Reviews for the 1st Edition: "...a comprehensive atlas rich in structural, histological, and functional detail. An absolute must for all neuroscientists navigating the rhesus monkey brain."--Dr. Leslie G. Ungerleider, NIMH-NIH "This is an extraordinarily detailed and comprehensive atlas of the macaque monkey brain. The figures are beautiful and very clear; the inclusion of sections stained with three staining methods, and their correlation with high-resolution MRI scans gives the atlas depth and validity. It should be widely used, and is likely to become a standard."--Dr. Joseph L. Price, Washington University in St. Louis "Simply excellent! This much needed atlas is meticulous and clear, and a brilliant exposition of the basic anatomical relationships of the macaque brain. It will be a treasured reference and guide for both experts and beginners over a wide range of research areas."--Dr. Kathleen S. Rockland, Riken Brain Science Institute, Japan "Our ability to decipher the intricate circuitry and function of the primate brain depends upon accurately localizing experimental data to particular spatial coordinates and to particular architectonic subdivisions revealed by postmortem histochemistry. This atlas of the macaque brain will serve as a valuable resource to the neuroscience community because it combines detailed architectonic maps with high-resolution structural MRI that preserves information about spatial coordinates."--Dr. David C. VanEssen, Washington University in St. Louis "To discover the secrets of perception, memory, action, and consciousness, we must be able to navigate the secret passageways of the nervous system. In a lovingly