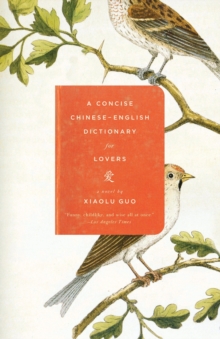 A CONCISE CHINESE-ENGLISH DICTIONARY FOR LOVERS

Product Description From one of our most important contemporary Chinese authors: a novel of language and love that tells one young Chinese woman's story of her journey to the Westâ€”and her attempts to understand the language, and the man, she adores. Zhuangâ€”or â€œZ,â€ to tongue-tied foreignersâ€”has come to London to study English, but finds herself adrift, trapped in a cycle of cultural gaffes and grammatical mishaps. Then she meets an Englishman who changes everything, leading her into a world of self-discovery. She soon realizes that, in the West, â€œloveâ€ does not always mean the same as in China, and that you can learn all the words in the English language and still not understand your lover. And as the novel progresses with steadily improving grammar and vocabulary, Z's evolving voice makes her quest for comprehension all the more poignant. With sparkling wit, Xiaolu Guo has created an utterly original novel about identity and the cultural divide. Review "Funny, childlike and wise all at once." â€”Los Angeles Times Â  â€œWhat makes this novel winsome is hearing the authentic voice of a young woman â€” bewildered, self-deprecating, funny, wise â€” as she navigates the world on her own.â€ â€”USA Today Â  â€œEndearing. . . . Concise takes us into a new territory, all the more exciting for its virginity.â€ â€”Chicago Sun-Times Â  â€œA fast, breezy read, don't be so easily entertained as to miss the many nuances-beyond the most obvious definitions are deeper, more satisfying meanings.â€ â€”San Francisco Chronicle About the Author Xiaolu Guo published six books in China before moving to London in 2002. The English translation ofÂ  Village of StoneÂ was shortlisted for the Independent Foreign Fiction Prize and nominated for the International IMPAC Dublin Literary Award. Her first novel written in English,Â  A Concise Chinese-English Dictionary for Lovers, was shortlisted for the Orange Broadband Prize for Fiction, andÂ  Twenty Fragments of a Ravenous Youth, published in 2008, was longlisted for the Man Asian Literary Prize. She is also a successful director of feature films, includingÂ  She, a ChineseÂ andÂ  UFO in Her Eyes, and documentaries; her work has premiered at the Venice Film Festival, the Toronto Film Festival, and other venues all over the world. She was named as one ofÂ  Grantaâ€™s Best Young British Novelists in 2013. www.guoxiaolu.com Excerpt. Â© Reprinted by permission. All rights reserved. alien (â€™ei.li.En) adj. 1. foreign; 2. repugnant (to);Â  3. from another world â€“ n. 1. foreigner; 2. being from another world. alien Is unbelievabal, I arriving London, â€œHeathlow Airport.â€ Every single name very difficult remembering, because just not â€œLondon Airportâ€ simple way like we simple way call â€œBeijing Airport.â€ Everything very confuse way here, passengers is separating in two queues. Sign in front of queue say: ALIEN and NON ALIEN. I am alien, like Hollywood film Alien, I live in another planet, with funny looking and strange language. I standing in most longly and slowly queue with all aliens waiting for visa checking. I feel little criminal but I doing nothing wrong so far. My English so bad. How to do? In my text book I study back China, it says English peoples talk like this: â€œHow are you?â€â€œI am very well. How are you?â€â€œI am very well.â€ Question and answer exactly the same! Old saying in China: â€œ Birds have their bird language, beasts have their beast talkâ€. English they totally another species. Immigration officer holding my passport behind his accounter, my heart hanging on high sky. Finally he stamping on my visa. My heart touching down like air plane. Ah. Wo. Ho. Ha. Picking up my luggage, now I a legal foreigner. Because legal foreigner from Communism region, I must reâ€“educate, must match this capitalism freedom and Western democracy. All I know is: I not understanding what people say to me at all. From now on, I go with Concise Chineseâ€“English Dictionary at all times. It is red cover, look just like Little Red Book. I car