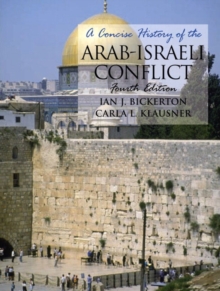 A CONCISE HISTORY OF THE ARAB-ISRAELI CONFLICT (4TH EDITION)

Product Description This text aims to present balanced, impartial coverage of the history of the Arab-Israeli conflict. Bickerton (U. of New South Wales, Australia) and Klausner (U. of Missouri, Kansas City) developed the text while team teaching a colloquium at the University of Missouri. The volume begins with an overview of Judaism and Islam and the landscape of Palestine. Other topics include the partition of Palestine following the Holocaust, the Camp David Accords, and the collapse of the peace process in September 2000. Annotation c. Book News, Inc., Portland, OR (booknews.com) From the Back Cover This concise and comprehensive text presents balanced, impartial, and well-illustrated coverage of the history of the Arab-Israeli conflict. The authors identify and examine the issues and themes that have characterized and defined the conflict over the past century. An all new final chapter examines the latest developments in the Middle East and includes the most up-to-date assessment of the course of the peace process, as well as its unraveling. Excerpt. Â© Reprinted by permission. All rights reserved. The first edition of this book was written ten years ago. Since then, there have been tremendous changes both in the Arab-Israeli conflict itself, and in the way it has been written about. The Gulf War of 1991, the Madrid peace conference later the same year, the end of the Cold War and dissolution of the Soviet Union, together with the 1993 Oslo accord between Israel and the Palestine Liberation Organization, led to a changed dynamic in the relations between Israel and the Arab countries, and to a significant transformation in the relationship between Israel and the Palestinians. Over the next seven years, until mid-2000, remarkable, if halting, measures were taken by both sides toward a peaceful resolution of the complex issues that had divided Jews and Arabs for the past century. Then, dramatically, in September 2000, we witnessed a reversal and a return to an escalating cycle of violence and alienation. The way the participants, including their respective historians, view, speak, and write about themselves and each other has also significantly shifted in the past decade. The discourse between Palestinians/Arabs and Israelis, and within each group?especially among Israelis?has matured and moderated with the passage of time, and despite recent events, we still believe that a majority on both sides recognize that specific goals are more attainable through peaceful means than by warfare. Bitterness and hatred may once again threaten to destroy the fabric of the peace process built up between Israelis and Palestinians; nevertheless, Israel is now recognized and accepted as a reality by most Arabs, and most Israelis are ready to acknowledge the almost certain possibility of a Palestinian state. Despite extremists in both camps, Arabs no longer call for Israel to be driven into the sea, and Israelis understand that Palestinians are more than a bunch of terrorists. With this new awareness, new questions have arisen, new frameworks through which the past and present can be viewed have been constructed, new histories have been written. Of course, the circumstances that produced the Arab-Israeli conflict have not changed, nor have old enmities disappeared. Historians cannot ignore or change past events or sentiments. We simply see things differently in the twenty-first century than we did in earlier years. Time provides alternative perspectives with which to interpret events. The most dramatic example of this is to be seen in the way a group of Israeli historians, "post-Zionists"?called the New Historians?have reinterpreted the history of the origins and early history of Israel and have challenged many of what they call the myths of the previous generation of nationalist historians. A similar revision of Palestinian and Arab history will, no doubt, appear in the future. The Arab-Israeli conflict continues to surprise pundits and comme