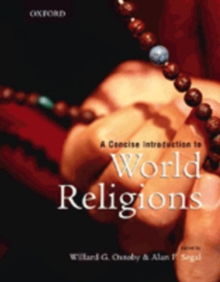 A CONCISE INTRODUCTION TO WORLD RELIGIONS

Product Description Ideal for a one-semester course, this new text--based on the two-volume introduction published in 2001 and edited by Willard G. Oxtoby--covers the major world religions, addressing their significance in today's society and culture and also in historical perspective. Each chapter is written by an esteemed scholar and covers a different tradition, focusing on six areas: the origins of the movement; the crystallization of its teachings; its major divisions in regional and historical perspective; the practices of the tradition's adherents and religious specialists; its influences on society, literature, and the arts; and the modern-day intellectual, social, and technological challenges it faces. Each chapter is structured in the same format--in order to facilitate comparative analysis--opening with a "Tradition at a Glance" feature that provides basic details about the tradition in outline form. Sidebar features include sayings of the founder or other figures, biographical sketches of major historical and modern thinkers, and illustrations of important symbolism and iconography. A glossary, tables of basic facts, maps, timelines, lists of key geographical sites, questions, and further readings are also included. About the Author The late Willard Oxtoby was formerly a professor of Religion at the University of Toronto. Alan Segal is a Professor of Religion and the Ingeborg Rennert Professor of Jewish Studies at Barnard College, Columbia University