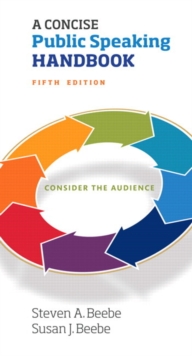 by: Beebe, Steven A.
Format: Spiral-bound

Product Description For courses in Public Speaking Â  An audience-centered approach to public speaking in a concise reference format A Concise Public Speaking Handbook emphasizes the importance of analyzing and considering the audience at every point in the speech-making process. Using a concise reference format that facilitates quick and easy access to key information, authors Steven and Susan Beebe present a balance of theory and practice to guide students on how to enhance their public speaking skills. By focusing student attention on the dynamics of diverse audiences, ethics, and communication apprehension, the text narrows the gap between the classroom and the real world. The Fifth Edition includes fresh examples throughout to ensure that content is relatable and engaging for students. Â  A Concise Public Speaking Handbook, Fifth Edition is also available viaÂ Revelâ„¢, an interactive learning environment that enables students to read, practice, and study in one continuous experience.Â  You can also purchase a loose-leaf print reference to complement Revel A Concise Public Speaking Handbook . This is optional. About the Author Steven A. Beebe is Regentsâ€™ and University Distinguished Professor in the Department of Communication Studies at Texas State University. He served as Chair of his department at Texas State for twenty-eight years and concurrently as Associate Dean for twenty-five years. Steve is the author or co-author of twelve widely used communication books, most of which have been through multiple editions (including Russian and Chinese editions), as well as numerous articles, book chapters, and conference presentations. He has been a Visiting Scholar at both Oxford University and Cambridge University in England. He made international headlines when conducting research at Oxford; he discovered a manuscript that was the partial opening chapter of a book that was to be co-authored with J. R. R. Tolkien and C. S. Lewis called Language and Human Nature. Steve has traveled widely in Europe and Asia, and has played a leadership role in establishing new communication curricula in Russian universities. He has received his universityâ€™s highest awards for research and twice for service, has been recognized as Honors Professor of the year, and was named Outstanding Communication Professor by the National Speakerâ€™s Association. In 2013 he served as President of the National Communication Association, the largest professional communication association in the world. His passions include his family and a lifelong love of music; he is a pianist and organist and a struggling cellist. Susan J. Beebeâ€™s professional interests and expertise encompass both oral and written communication. Sue has co-authored three books and has published a number of articles and teaching materials in both English and communication studies. She has received the Texas State University Presidential Awards for Excellence in Teaching and in Service and the College of Liberal Arts Awards for Excellence in Scholarly/Creative Activities, in Teaching, and in Service. After serving as Director of Lower-Division Studies in English for eleven years, Sue retired in 2014 from the Department of English at Texas State. An active volunteer in the community of San Marcos, Texas, Sue was the founding coordinator of the San Marcos Volunteers in Public Schools Program and has served on the San Marcos School Board and the Education Foundation Board. In 1993 she was named the statewide Friend of Education by the Texas Classroom Teachersâ€™ Association; in 2000 the San Marcos school district presented her with its Lifetime Achievement Award. Sue enjoys reading, traveling, and caring for the Beebe family cats, Luke and Bouncer. Sue and Steve have two sons: Mark, a graduate of Rice University; and Matt, a graduate of Southwestern University and a middle school teacher in nearby Austin.