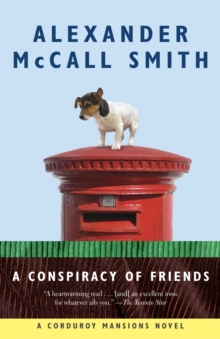 Product Description CORDUROY MANSIONS - Book 3In the Corduroy Mansions series of novels, set in Londonâ€™s hip Pimlico neighborhood, we meet a cast of charming eccentrics, including perhaps the worldâ€™s most clever terrier, who make their home in a handsome, though slightly dilapidated, apartment block.Â The universe seems to be conspiring against Freddie de la Hay and his neighbors at Corduroy Mansions, as they all struggle with their nearest and dearest in this captivating third installment of Alexander McCall Smithâ€™s London series.Â Berthea Snark is still at work on a scathing biography of her son, Oedipus, the only loathsome Liberal Democrat Member of Parliament; literary agents Rupert Porter and Barbara Ragg are in a showdown for first crack at the Autobiography of a Yeti manuscript; fine arts graduate Caroline Jarvis is exploring the blurry line between friendship and romance; and William French is worrying that his son, Eddie, will never leave home, even with Eddieâ€™s new, wealthy girlfriend in the picture. But foremost in everyoneâ€™s mind is Williamâ€™s faithful dog, Freddie de la Hay, who has disappeared while on a mystery tour of the Suffolk countryside. Will Freddie find his way home, or will Corduroy Mansions be left without its beloved mascot? Review â€œA heart-warming read. . . . [and] an excellent tonic for whatever ails you.â€ Â Â Â Â â€” The Toronto Star â€œMcCall Smith cooks up a delicious story . . . with a dash of mystery and a dollop of satire. . . . Comfortable, easy, homey.â€ Â Â Â  â€” The Washington Post Â  â€œFascinating fare. . . . McCall Smith is by turns hilarious . . . and meditative.â€ Â Â  â€” Booklist (starred review) Â  â€œTeeming with charm. . . . ample humor and grace.â€ Â Â  â€” Publishers Weekly (starred review) â€œThis third volume of Chekhovian soap opera is every bit as addictive as the first two.â€ Â Â  â€” Kirkus Reviews â€œYou cannot beat McCall Smith for subtle musings shot through with insight and wit. His deft characterization enlivens the inner workings of everyday characters. His work offers a heartening view of [the] world.â€ Â Â  â€” The Daily Telegraph (London) â€œ[Full] of warmth and wisdom and easy, accomplished writing that begs for a comfy chair.â€ Â Â  â€” The Times (London) â€œWhimsical. . . . McCall Smith specializes in subplots that punctuate the book like polka dots, relying on his considerable literary skills to link them into a merry pattern of human events.â€ Â Â Â â€” The Washington Times â€œQuirky and original. . . . Told with warmth, wit and intelligence, and McCall Smithâ€™s cast of characters are beautifully observed.â€ Â Â  â€” Daily Express About the Author Alexander McCall Smith is also the author of the No. 1 Ladiesâ€™ Detective Agency series, the Isabel Dalhousie series, the Portuguese Irregular Verbs series and the 44 Scotland Street series. He is professor emeritus of medical law at the University of Edinburgh in Scotland and has served with many national and international organizations concerned with bioethics. He lives in Scotland. Visit him at www.alexandermccallsmith.com. Excerpt. Â© Reprinted by permission. All rights reserved. 1. The Only Unpleasant Liberal DemocratÂ Oedipus Snark had a number of distinctions in this life. The first of theseâ€”and perhaps the most remarkableâ€”was that he was, by common consent, the only truly nasty Liberal Democrat Member of Parliament. This was not just an accolade bestowed upon him by journalists in search of an amusing soubriquet, it was a judgement agreed upon by all those who knew him, including, most notably, his mother. Berthea Snark, a well-known psychoanalyst who lived in a small, undistinguished mews house behind Corduroy Mansions, had tried very hard to love her son, but had eventually given up, thus joining that minuscule groupâ€”mothers who cannot abide their sons. So rare is the phenomenon, and so willing are most mothers to forgive their sons any shortcoming, that this demographicâ€”that is to say, in English, these peopleâ€”is completely ignored by marketeers. And that,