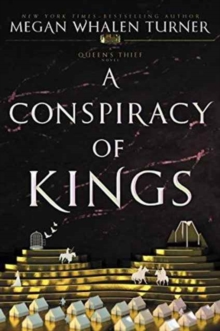 A CONSPIRACY OF KINGS (QUEEN'S THIEF)

Product Description Discover and rediscover the world of the Queen's Thief, from the acclaimed novelÂ The ThiefÂ to the thrilling, twenty-years-in-the-making conclusion,Â The Return of the Thief. The epic novels set in the world of the Queenâ€™s Thief can be read in any order. New York Times-bestselling author Megan Whalen Turnerâ€™s entrancing and award-winning Queenâ€™s Thief novels bring to life the world of the epics and feature one of the most charismatic and incorrigible characters of fiction, Eugenides the thief. Megan Whalen Turnerâ€™s Queenâ€™s Thief novels are rich with political machinations and intrigue, battles lost and won, dangerous journeys, divine intervention, power, passion, revenge, and deception. The New York Times bestseller A Conspiracy of Kings won the Los Angeles Times Book Award and is perfect for fans of Leigh Bardugo, Marie Lu, Patrick Rothfuss, and George R. R. Martin. After an attempted assassination and kidnapping, Sophos, heir to the throne of Sounis, disappears. Those who care for himâ€”including the thief Eugenides and the Queen of Eddisâ€”are left to wonder if he is alive and if they will ever see him again. The Queenâ€™s Thief novels have been praised by writers, critics, reviewers, and fans and have been honored with glowing reviews, â€œbest ofâ€ citations, and numerous awards, including the Los Angeles Times Book Prize, a Newbery Honor, the Andre Norton Award shortlist, and the Mythopoeic Fantasy Award.Â  This edition of A Conspiracy of Kings includes a conversation between bestselling author Leigh Bardugo and Megan Whalen Turner, an introduction to the characters from the world of the Queenâ€™s Thief, a map of the world of the Queenâ€™s Thief, and an exclusive teaser to Thick as Thieves. Winner of the LA Times Book Award A New York Times Bestseller A Boston Globe-Horn Book Honor Book A School Library Journal Best Book â€œThe Queenâ€™s Thief books awe and inspire me. They have the feel of a secret, discovered history of real but forgotten lands. The plot-craft is peerless, the revelations stunning, and the characters flawed, cunning, heartbreaking, exceptional. Megan Whalen Turnerâ€™s books have a permanent spot on my favorites shelf, with space waiting for more books to come.â€â€”Laini Taylor, New York Times-bestselling author of the Daughter of Smoke and Bone novels and Strange the Dreamer "Unforgettable characters, plot twists that will make your head spin, a world rendered in elegant detailâ€”you will fall in love with every page of these stories. Megan Whalen Turner writes vivid, immersive, heartbreaking fantasy that will leave you desperate to return to Attolia again and again."â€”Leigh Bardugo, #1Â New York Times-bestselling author ofÂ Six of CrowsÂ andÂ Crooked Kingdom â€œMegan Whalen Turner is one of my all-time favorite writers . . .Â impossible to put down.â€â€”Holly Black, award-winning and New York Times-bestselling author of the Modern Faerie Tale series and The Darkest Part of the Forest â€œRomance, intrigue, mystery, surprises, and sheer beautiful writing.â€â€”Cassandra Clare, award-winning and New York Times-bestselling author of The Mortal Instruments and Lady Midnight â€œThe world Turner creates is so tangible that not only do I believe in its characters, I almost believe in its gods.â€â€”Kristin Cashore, award-winning and New York Times-bestselling author of the Graceling Realm series â€œA Conspiracy of Kings brings the sweetest, sharpest kind of reading pleasure. Megan Whalen Turnerâ€™s books are pure joy.â€â€”Rebecca Stead, Newbery Medalist and New York Times-bestselling author of When You Reach Me and Goodbye Stranger Review Praise for The Thief: Newbery Honor Book â€œThis is an uplifting book, a literary journey that enhances both its characters and readers before it is over.â€ ( Kirkus Reviews) â€œTantalizing, suspenseful, exceptionally clever.â€ (Horn Book (starred review)) Praise for The Queen of Attolia: â€œThe intense read is thoroughly involving and wholly satisfying on all fronts.â€ (Horn Book (starred review)) â€œTurnerâ€™s s