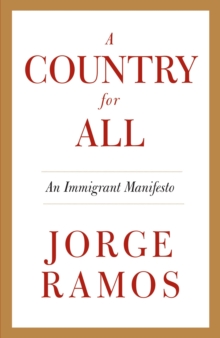 A COUNTRY FOR ALL: AN IMMIGRANT MANIFESTO

Product Description For decades, fixing the United Statesâ€™ broken immigration system has been one of the most urgent challenges facing our country, and time and time again, politicians have passed the buck. With anti-immigrant sentiment rising around the country, and presidential elections on the horizon, itâ€™s no surprise immigration reform is on every candidateâ€™s agenda. While some candidates offer viable solutions, others perpetuate negative stereotypes and unpractical resolve. Ramos fearlessly questions political tactics, and has undoubtedly become the voice of the Latino vote in the US. It is now more important than ever to remember the role immigrants play in enriching our economy and culture, and to find a way to incorporate the millions of productive, law-abiding workers who have been drawn to the United States by the inexorable pull of freedom and economic opportunity. In this timely book, award-winning journalist Jorge Ramos makes the case for a practical and politically achievable solution to this poignant issue. Ramos argues that we have a simple choice: to take a pragmatic approach that deals with the reality of immigration, or to continue a cruel and capricious system that doesnâ€™t work, wastes billions of dollars, and which stands in direct opposition to our national principles. About the Author Jorge Ramos is an Emmy Award winning journalist, syndicated columnist, and author of nine previous books. Hailed by Time magazine as one of â€œthe 25 most influential Hispanics in the United States,â€ Ramos anchors the nightly news and hosts a weekly political show on Univision, the countryâ€™s largest Spanish-language television network. He regularly appears on ABC, CBS, NBC, and CNN to discuss immigrant rights. Born in Mexico City, Ramos has lived in the United States for more than twenty-five years. Visit the author's website at www.jorgeramos.com. Excerpt. Â© Reprinted by permission. All rights reserved. One THE INVISIBLES Nobody notices them. Sometimes they pass right in front of us, and we look through them as if they were not there. But they are here, and the United States would be a very different country without them. People don't realize just how important they are to our way of life. Those who go through each day unseen are undocumented immigrants. The invisibles. They go out of their way not to be noticed by authorities or counted by census takers. It's not always easy to distinguish exactly who is an immigration agent. In order to avoid the risk of making a mistake, they talk to no one. They stay away from the police. The invisibles keep their distance from them, even though many times they need protection from the violence of those who want to do them harm. The less they're seen, the greater the chance that they will be left alone to work and earn their wages in peace. They live in the shadows. Being seen is a great risk and could mean deportation from the country that they have called home for years, the country where their children were born and, for many, their grandchildren too. They live in silence. They don't often complain, though they certainly have reasons to. Complaints lead to questions. Questions lead to trouble. When we cross paths with them on the street, they quickly avert their eyes. Not being is their way of being. For them, not having an identity is their identity. Nevertheless, the United States could not function without their labor. They do this country's most difficult, least desirable, lowest-paying work. They clean what nobody else will clean, harvest the crops no one will harvest, cook our food, and build our houses. It's likely that you're hardly aware of their presence in hotels and restaurants. But they're there. They're like ghosts. They walk without making noise and speak only when it's absolutely essential for them to do so. They work behind the scenes, in kitchens, doing anything from washing dishes to preparing the finest cuisine. They learn quickly, and they are adept at making thi