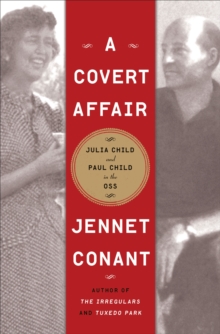 A COVERT AFFAIR: JULIA CHILD AND PAUL CHILD IN THE OSS

Product Description Bestselling author Jennet Conant brings us a stunning account of Julia and Paul Childâ€™s experiences as members of the Office of Strategic Services (OSS) in the Far East during World War II and the tumultuous years when they were caught up in the McCarthy Red spy hunt in the 1950s and behaved with bravery and honor. It is the fascinating portrait of a group of idealistic men and women who were recruited by the citizen spy service, slapped into uniform, and dispatched to wage political warfare in remote outposts in Ceylon, India, and China. The eager, inexperienced 6 foot 2 inch Julia springs to life in these pages, a gangly golf-playing California girl who had never been farther abroad than Tijuana. Single and thirty years old when she joined the staff of Colonel William Donovan, Julia volunteered to be part of the OSSâ€™s ambitious mission to develop a secret intelligence network across Southeast Asia. Her first post took her to the mountaintop idyll of Kandy, the headquarters of Admiral Lord Louis Mountbatten, the supreme commander of combined operations. Julia reveled in the glamour and intrigue of her overseas assignment and lifealtering romance with the much older and more sophisticated Paul Child, who took her on trips into the jungle, introduced her to the joys of curry, and insisted on educating both her mind and palate. A painter drafted to build war rooms, Paul was a colorful, complex personality. Conant uses extracts from his letters in which his sharp eye and droll wit capture the day-to-day confusion, excitement, and improbability of being part of a cloak- and-dagger operation. When Julia and Paul were transferred to Kunming, a rugged outpost at the foot of the Burma Road, they witnessed the chaotic end of the war in China and the beginnings of the Communist revolution that would shake the world. A Covert Affair chronicles their friendship with a brilliant and eccentric array of OSS agents, including Jane Foster, a wealthy, free-spirited artist, and Elizabeth MacDonald, an adventurous young reporter. In Paris after the war, Julia and Paul remained close to their intelligence colleagues as they struggled to start new lives, only to find themselves drawn into a far more terrifying spy drama. Relying on recently unclassified OSS and FBI documents, as well as previously unpublished letters and diaries, Conant vividly depicts a dangerous time in American history, when those who served their country suddenly found themselves called to account for their unpopular opinions and personal relationships. From Publishers Weekly Julia Child's passion for French cuisine began when she and her husband, Paul, moved to Paris in 1948. The couple met in Ceylon in 1944 when both were in the Office of Strategic Services, precursor to the CIA, and they married two years later. To tell their story, Conant (The Irregulars) combed through numerous archives to fill in the deep backgrounds of their OSS friends. Opening with OSS origins and the 1943 OSS recruits, the narrative follows the WWII trajectory of Julia Child, who volunteered for a post at the OSS base in India. At Mountbatten's mountaintop headquarters, the team included Julia, Paul, and the flamboyant Jane Foster. With the end of WWII, Jane flew to Java to record the war crimes testimonies of American POWs, while Paul and Julia's romance heated up in China and France. The couple fell under suspicion when Jane was targeted with accusations of espionage, having "left a trail of Communist ties the FBI followed like breadcrumbs" (though Conant found no conclusive evidence that Jane was a Soviet spy). The bulk of this book is mostly about Jane, making the title somewhat misleading, but Conant's vivid tapestry of the 1940s skillfully interweaves interviews, oral histories, memoirs, and recently unclassified OSS and FBI documents with unpublished diaries and letters. The adventurous young OSS recruits spring to life throughout this meticulously researched, author