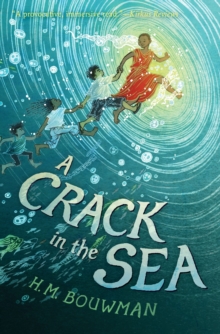 A CRACK IN THE SEA

Product Description An enchanting historical fantasy adventure perfect for fans of Thanhha Lai's Newbery Honor-winning Inside Out and Back Again Â  No one comes to the Second World on purpose. The doorway between worlds opens only when least expected. The Raft King is desperate to change that by finding the doorway that will finally take him and the people of Raftworld back home. To do it, he needs Pip, a young boy with an incredible giftâ€”he can speak to fish; and the Raft King is not above kidnapping to get what he wants. Pipâ€™s sister Kinchen, though, is determined to rescue her brother and foil the Raft Kingâ€™s plans. Â  This is but the first of three extraordinary stories that collide on the high seas of the Second World. The second story takes us back to the beginning: Venus and Swimmer are twins captured aboard a slave ship bound for Jamaica in 1781. They save themselves and others from a life of enslavement with a risky, magical planâ€”one that leads them from the shark-infested waters of the first world to the second. Pip and Kinchen will hear all about them before their own story is said and done. So will Thanh and his sister Sang, who we meet in 1978 on a small boat as they try to escape post-war Vietnam. But after a storm and a pirate attack, theyâ€™re not sure theyâ€™ll ever see shore again. What brings these three sets of siblings together on an adventure of a lifetime is a little magic, helpful sea monsters and that very special portal, A Crack in the Sea. From School Library Journal Gr 5 Upâ€”This engaging and wistful novel reimagines the outcome of tragic events from the past with a magical bent through three sibling-centered stories. First, readers meet Pip and his sister Kinchen, who live in the "second world" on one of the few pieces of viable land, the island of Tathenn. The rest of the population live on a giant community of rafts bound together, called Raftworld, ruled by the Raft King. Select people in this world are born with giftsâ€”storytelling, the capacity to walk on water, and, in Pip's case, the ability to communicate with fish and other sea creatures. Next, readers are introduced to Venus and Swimmer, twins who, after being captured by a "first world" slave ship in 1781, eventually lead their people to freedom by going through a crack in the sea to the second world. Finally, there's Thanh, his sister Sang, and several relatives, who flee war-torn Vietnam in 1976 in search of a better life. A difficult journey, including a violent encounter with Thai pirates, leaves them desperate and hungry in the middle of the ocean. Though the plot is complicated and fantastical, Bouwman's world is never difficult to understand, and the three sibling tales eventually interweave beautifully. Shimizu's black-and-white illustrations enhance the narrative's progression. An afterword and further reading list provide insight and ideas for readers interested in the terrible true account of the Zong slave ship, which inspired the author. VERDICT Fans of Grace Lin will love this wholly original book that reads like a fairy tale. A moving and thought-provoking choice for library collections.â€”Kristy Pasquariello, Wellesley Free Library, MA Review Praise for A Crack in the Sea: Winter 2016-2017 Kidsâ€™ Indie Next PickÂ A Midwest Connections Pick for January 2017A Maine Student Book Award 2018-2019 Reading List Pick for Grades 4-6 and 4-8 A Sunshine State Young Readers Award Book 2018-2019 List Pick for Grades 6-8 ?Â â€œThrough theÂ captivating interwoven talesÂ of these three sibling pairsâ€”and with assistance from Shimizuâ€™sÂ powerful ink illustrationsâ€”Bouwman crafts aÂ moving narrativeÂ about family, magic, morality,Â the power of storytelling, and the cyclical nature of history.â€â€”Publishers Weekly, starred reviewâ€œThis novel touches on sensitive and tragic moments in history and gives them fantastical remediation for a provocative, immersive read.â€â€”Kirkus ReviewsÂ â€œFans of Grace Lin will love this wholly original book that reads like a f