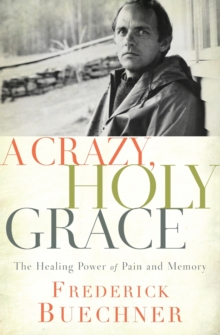 A CRAZY, HOLY GRACE: THE HEALING POWER OF PAIN AND MEMORY

Product Description When pain is real, why is God silent? Frederick Buechner has grappled with the nature of pain, grief, and grace ever since his father committed suicide when Buechner was a young boy. He continued that search as a father when his daughter struggled with anorexia. In this essential collection of essays, including one never before published, Frederick Buechner finds that the God who might seem so silent is ever near. He writes about what it means to be a steward of our pain, and about this grace from God that seems arbitrary and yet draws us to his holiness and care. Finally he writes about the magic of memory and how it can close up the old wounds with the memories of past goodnesses and graces from God. Here now are the best of Buechnerâ€™s writings on pain and loss, covering such topics as the power of hidden secrets, loss of a dearly beloved, letting go, resurrection from the ruins, peace, and listening for the quiet voice of God. And he reveals that pain and sorrow can be a treasureâ€”an amazing grace. Buechner says that loss will come to all of us, but he writes that we are not alone. Crazy and unreal as it may sometimes seem, Godâ€™s holy, healing grace is always present and available if we are still enough to receive it. Â  Review â€œFrederick Buechner brings the reader to his knees, sometimes in laughter, sometimes in an astonishment very close to prayer, and at the best of times in a combination of both.â€ -- - The New York Times Book Review â€œFrederick Buechner has inspired me not only with his writing, but with his generosity of spirit. Iâ€™m incredibly thankful.â€ -- â€“ Rachel Held Evans â€œFrederick Buechner is a beacon. When we canâ€™t remember what is true and what it all means, heâ€™s the person we turn to.â€ -- â€“ Anne Lamott â€œHe isnâ€™t trying to persuade â€“ heâ€™s trying to understand what he himself believes and thinks. And that honesty is more persuasive than the most polished argument.â€ -- â€“ John Ortberg â€œFrederick Buechner doesnâ€™t just show us how to write; he shows us how to live.â€ -- â€“ Philip Yancey â€œFrederick Buechner is not just a wordsmith but an image-smith â€“ heâ€™s the bridge between Gutenberg and Google.â€ -- â€“ Len Sweet â€œTo each new generation, his work is a revelation.â€ -- - The Lutheran â€œFrederick Buechner gives new life to Christian truth.â€ -- â€“ Katelyn Beaty â€œWith profound intelligence, Buechnerâ€™s novel does what the finest, most appealing literature does: it displays and illuminates the seemingly unrelated mysteries of human character and ultimate ideas... One of our finest writers.â€ -- - Annie Dillard, Boston Globe â€œIf Frederick Buechner subordinated his nature and chose to write on naughts and nothings, he would still exalt his readers. When he is in representative harmony and writes of the accessibility of God to humanity and of humanityâ€™s agreement with its potential divinity, we, the readers, are lifted up, buoyed up, and promised wholeness.â€ -- - Maya Angelou About the Author Frederick Buechner is the author of more than thirty published books and has been an important source of inspiration and learning for many readers. A prolific writer, Buechnerâ€™s books have been translated into twenty-seven languages. He has been called a "major talent" by the New York Times, and "one of our most original storytellers" by USA Today. A finalist for the Pulitzer Prize and the National Book Award, Buechner has been awarded honorary degrees from institutions including Yale University and Virginia Theological Seminary.