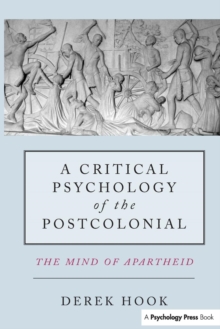 A CRITICAL PSYCHOLOGY OF THE POSTCOLONIAL

Product Description An oft-neglected element of postcolonial thought is the explicitly psychological dimension of many of its foundational texts. This unprecedented volume explores the relation between these two disciplinary domains by treating the work of a variety of anti-colonial authors as serious psychological contributions to the theorization of racism and oppression. This approach demonstrates the pertinence of postcolonial thought for critical social psychology and opens up novel perspectives on a variety of key topics in social psychology. These include: The psychology of embodiment and racialization Resistance strategies to oppression 'Extra-discursiveâ€™ facets of racism The unconscious dimension of stereotypes The intersection of psychological and symbolic modalities of power In addition, the book makes a distinctive contribution to the field of postcolonial studies by virtue of its eclectic combination of authors drawn from anti-apartheid, psychoanalytic and critical social theory traditions, includingÂ Homi Bhabha, Steve Biko, J.M. Coetzee, Frantz Fanon, Julia Kristeva, Chabani Manganyi and Slavoj ?i?ek. The South African focus serves to emphasize the ongoing historical importance of the anti-apartheid struggle for todayâ€™s globalized world. A Critical Psychology of the Postcolonial is an invaluable text for social psychology and sociology students enrolled in courses on racism or cultural studies. It will also appeal to postgraduates, academics and anyone interested in psychoanalysis in relation to societal and political issues. Review "An innovative and productive account of the role of the sexual, bodily and visceral realms of desire, fantasy and affect underpinning the dynamics of post-colonial racism" - Catherine Campbell, London School of Economics, UK, in Ethnic and Racial Studies "Hook has produced what will be considered as an innovative and seminal text" -Saths Cooper, Psychological Society of South Africa and Brett Bowman, University of Witwatersrand, Johannesburg, in PsycCRITIQUES "A Critical Psychology of the Postcolonial is unprecedented in its depth and nuance. It is certain to appeal to anyone interested in critical psychology and social psychoanalysis, and for anyone interested in the psychology of apartheid it is essential reading." - Ross Truscott, University of Fort Hare, South Africa, in Psychoanalysis, Culture & Society "A convincing defence of the need for a critical psychology of the postcolonial ... helpful for those interested in exploring the psychological mechanisms which allow racism, and related forms of discrimination, to emerge, flourish and persist. The book will also be helpful for those interested in the writings of Fanon and Bhabha as it is to the ideas of these two postcolonialÂ scholars that Hook pays particular attention." -Sally Matthews, Rhodes University, South Africa, in African Identities "The work of Derek Hook in the field of racism is unparalled in the light it sheds on the psychic life of colonial power. Hook further extrapolates ... the examination of the affective components of racist discourses, always through the lens of an approach to psychology that is keenly attuned to the overarching logic through racism operates. ... It will be of interest not simply to those researching and theorising the postcolonial, but to those working in the field of racism in general and in psychology specifically." - Damien W. Riggs, Flinders University, Australia, in the Journal of African and Asian Studies "Hook's path-breaking contribution marshalls a range of new resources for a revitalisation of the social psychology of racism and resistance in the postcolonial context. The 'vernacular psychology' of Steve Biko and Black Consciousness thought, the psychoanalytic writings of Frantz Fanon and the anti-apartheid writings of Chabani Manganyi and J.M. Coetzee bring new insights in Hook's brilliant construction of an innovative critical approach." - Catherine Campbell, London