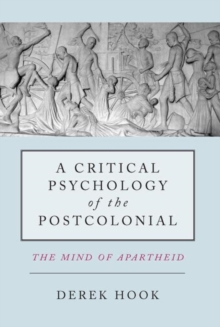 A CRITICAL PSYCHOLOGY OF THE POSTCOLONIAL: THE MIND OF APARTHEID

Product description An oft-neglected element of postcolonial thought is the explicitly psychological dimension of many of its foundational texts. This unprecedented volume explores the relation between these two disciplines by treating the work of a variety of anti-colonial authors as serious psychological contributions to the theorization of racism and oppression. This approach demonstrates the pertinence of postcolonial thought for critical social psychology and opens up novel perspectives on a variety of key topics in social psychology. These include: the psychology of embodiment and racialization resistance strategies to oppression 'extra-discursiveâ€™ facets of racism the unconscious dimension of stereotypes the intersection of psychological and symbolic modalities of power. In addition, the book makes a distinctive contribution to the field of postcolonial studies by virtue of its eclectic combination of authors drawn from anti-apartheid, psychoanalytic and critical social theory traditions, includingÂ Homi Bhabha, Steve Biko, J.M. Coetzee, Frantz Fanon, Julia Kristeva, Chabani Manganyi and Slavoj ?i?ek. The South African focus serves to emphasize the ongoing historical importance of the anti-apartheid struggle for todayâ€™s globalized world. A Critical Psychology of the Postcolonial is an invaluable text for social psychology and sociology students enrolled in courses on racism or cultural studies. It will also appeal to postgraduates, academics and anyone interested in psychoanalysis in relation to societal and political issues. Review "Hook's path-breaking contribution marshalls a range of new resources for a revitalisation of the social psychology of racism and resistance in the postcolonial context. The 'vernacular psychology' of Steve Biko and Black Consciousness thought, the psychoanalytic writings of Frantz Fanon and the anti-apartheid writings of Chabani Manganyi and J.M. Coetzee bring new insights in Hook's brilliant construction of an innovative critical approach." - Catherine Campbell, London School of Economics, UK "AÂ powerful articulation of a critical psychoanalytic postcolonial theory of racism. There is no easy way to untie the knots that bind the racialized subject into place, but this book offers a conceptual vocabulary with which to approach the task. Because of this, and also for the clarity and depth of its account of the major thinkers with which it deals, A Critical Psychology of the Postcolonial will be indispensible for students and academics working around issues of race, apartheid, social psychoanalysis, critical psychology and psychosocial studies" - Stephen Frosh, Birkbeck College, University of London, UK "This is clearly the boldest and most comprehensive attempt in recent years to critically explore the psychopolitical ambiguities of racist identification. Not only does it cogently summarize the best literature in the field (from Fanon to Bhabha and beyond), but it also advances a revealing pedagogy of the counter-intutitive highlighting and systematically exploring the ellusive real of apartheid racism: its reliance on the body, its often disturbing libidinal economy. Hookâ€™s accessible and reflexive style, his ability to creatively interrogate and articulate diverse research traditions (from postcolonial theory to Lacanian psychoanalysis), not to mention his compelling self-critical, interdisciplinary research ethos, will undoubtedly make this work a classic!" - Yannis Stavrakakis, Aristotle University of Thessaloniki, Greece "There are a few good studies on psychoanalysis and racism, but this is an innovative text that stands alone, defining new lines of research while addressing contemporary social issues."Â - Ian Parker, Manchester Metropolitan University, UK "Derek Hook has written a brilliant book which captures the libidinal economy of racism in such a way that Fanon (were he alive) would have tried to write himself." - Renata Salecl, University of Ljubljana, Slovenia "Through the methods of contrapuntal reading Hook invigorates psychoanalytic discourse, showing how it can be applied to understanding the thinking and affective attachments of colonial subjects. I learned a lot from reading this book. It is coherent, well argued, and innovative." â€“ Kevin Durrheim, University of KwaZulu-Natal, South Africa "Derek Hookâ€™s contribution in this book, in summary, is considerable. Not only does he provide an important account of what he terms "the mind of apartheid". Through his work, he also embodies precisely that which interests him â€“ a world of intellectual inquiry which takes visceral experience, and the affective, seriously. His work is anything but reductive â€“ he gives the reader the compliment of providing a textured and challenging account that demands both intellectual and affective engagement." - Leslie Swartz, PINS About the Author Derek Hook is a lecturer in Psychosocial Studies at Birkbeck College London, and a visiting associate professor in Psychology at the University of the Witwatersrand, South Africa. He is a lead researcher in the Apartheid Archive Project, and a trainee psychoanalyst at the Centre for Freudian Analysis and Research in London.