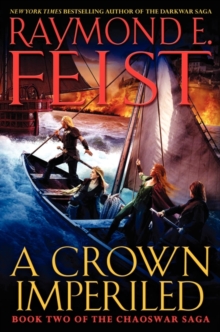 A CROWN IMPERILED: BOOK TWO OF THE CHAOSWAR SAGA

Product Description â€œFeist constantly amazes.â€â€”SF Site â€œFeist has a command of language and a natural talent for keeping the reader turning pages.â€Â â€”Chicago Sun-Times The Chaoswarâ€”the fifth and final Riftwarâ€”is in full, explosive swing in Raymond E. Feistâ€™s A Crown Imperiled, the second book in the acclaimed, New York Times bestselling fantasistâ€™sÂ  monumental saga of courage, conflict, and bitter consequence. Once again, Midkemia, the authorâ€™s brilliantly conceived fantasy milieu, is in gravest danger from outside invadersâ€”and from treacherous forces withinâ€”as the death of a powerful leader throws the world into chaos and threatens all hope of enduring peace. Returning in A Crown Imperiled are some of Feistâ€™s most memorable charactersâ€”including the great sorcerer, Pug, who has been a fan favorite since his introduction in the authorâ€™s beloved classic, Magicianâ€”and the action, as always, comes fast and furious. The Chaoswar Saga is the master fantasist working at the peak of his powers, and further proof why Raymond E. Feist, like Terry Goodkind, George R. R. Martin, and Terry Brooks, is one of the true giants of epic fantasy fiction. Review â€œFeist has a command of language and a natural talent for keeping the reader turning pages.â€ (Chicago Sun-Times) â€œFeist constantly amazes with his ability to create great casts of characters.â€ (SF Site) â€œWith his storytelling mastery and ear for colorful language and nuance, the author of numerous books set in the dual worlds of Midkemia and Kelewan here launches a series that takes his fantasy universe into a whole new phase. â€ ( Library Journal) â€œFast action, appealing characters, and a splendid setting will delight readers of fantasy and leave them eager for the next battle.â€ ( Kirkus Reviews) â€œSheer readability.â€ ( San Francisco Chronicle) From the Back Cover From the New York Times bestselling author of the Riftwar Cycleâ€”including the original Riftwar, the Serpentwar, the Darkwar, the Demonwar, and now the Chaoswarâ€”comes the latest entry in one of the most treasured and enduring sagas in modern fantasy. A Crown Imperilled War rages in Midkemia once again, and behind the chaos, disquieting evidence points to dark elements at work. As enemies march across the realm wreaking destruction, its brave and loyal defenders battle to surviveâ€”a struggle made more perilous now that Jim Dasher's trusted intelligence network has been cleverly dismantled. Region by region, Midkemia is being ripped apart, and the loyal spy and his allies find themselves overpowered at every turn. Signs of the kingdom's impending doom surround them. King Gregory of the Isles has yet to produce an heir. Roldem and Rillanon have each been plagued by palace coups that threaten to topple their thrones. Lord Hal of Crydee and his great friend Ty Hawkins, champion swordsman of the Masters' Court, have been entrusted with smuggling Princess StephanÃ© and her lady-in-waiting, the lovely and perplexing Lady Gabriella, out of Roldem to safety. But the rising danger has made finding refuge treacherous. Nowhere is safe, including Ylith, Midkemia's strategic bastion, where Hal's younger brothers Martin and Brendan hold off an onslaught of brutal Keshian Dog Soldiers and a mysterious force from beneath the sea. Yet courage alone is not enough to withstand the continued enemy assault. Without reinforcements, hope of success fades. Martin, Brendan, and their compatriots know that while losing Crydee, the legendary city on the kingdom's edge, would be devastating, the realm can still be saved. But if Ylith falls, all is lost. As Jim, Hal, and all their brothers in arms fight for their lives, Pug and the Conclave of Shadows embark on a magical quest to hunt down the dark force orchestrating the destruction before Midkemia is annihilated. And time is running out. . . . About the Author Raymond E. FeistÂ is the author of more than thirty previous books, including the internationally bestselling â€œRiftwar Cycleâ€ of novels se