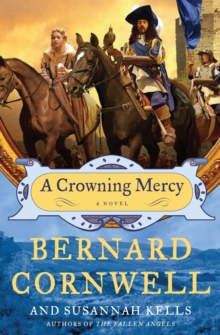 A CROWNING MERCY: A NOVEL

Product Description â€œIf you love historical dramaâ€¦then look no further.â€Â â€”Boston GlobeÂ Bernard Cornwell, the perennial New York Times bestselling author of the Richard Sharpe series and â€œperhaps the greatest writer of historical adventure novels todayâ€ (Washington Post) joins co-author Susannah Kells for A Crowning Mercyâ€”a breathtaking romantic adventure set against the dramatic backdrop of the English Civil War. The exciting story of a rebellious Puritan woman on a perilous quest for love and fortune, A Crowning Mercy is a must for Cornwell fans as well as for devoted readers of Sharon Kay Penman and Diana Gabaldon. From the Back Cover The civil war that is tearing England asunder in the year 1643 has not yet touched Dorcas Slythe, a secretly rebellious young Puritan woman living in the countryside south of London. She aches to escape the safe, pious tyranny of her fatherâ€”and the opportunity appears with the arrival of Toby Lazender, dashing scion of a powerful royalist family, who awakens her to her passionate destiny. Her adventure truly begins with the discovery of an intricately wrought gold sealâ€”one of four that, when joined, will reveal a great secret. Suddenly grave danger lies before herâ€”not from Cromwell's advancing armies, but from relentless enemies who covet the great treasure to which she now holds the key. About the Author BERNARD CORNWELL is the author of the acclaimed New York Times bestselling Saxon Tales series, which includes The Last Kingdom, The Pale Horseman, Lords of the North, Sword Song, The Burning Land, Death of Kings, The Pagan Lord, and, most recently, The Empty Throne and Warriors of the Storm, and which serves as the basis for the hit television series The Last Kingdom. He lives with his wife on Cape Cod and in Charleston, South Carolina. Susannah Kells is the pen name of Bernard's wife, Judy Cornwell. They live on Cape Cod, Massachusetts.