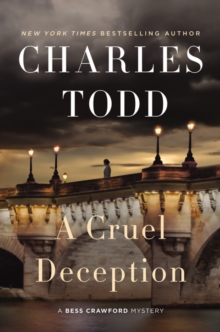 Product Description â€œAs always, Toddâ€™s intense feelings for the traumatized survivors of war make one motherâ€™s son the broken hero of an entire generation of lost souls.â€Â  â€” TheÂ New York Times Book Review In the aftermath of World War I, English nurseÂ Bess Crawford attempts to save a troubled officerÂ from a mysterious killer in this eleventh book inÂ the acclaimed Bess Crawford mystery series. The Armistice of November 1918 ended the fighting, but the Great War will not be over until a Peace Treaty is drawn up and signed by all parties involved. Representatives from the Allies are gathering in Paris, and already ominous signs of disagreement have appeared. Sister Bess Crawford, who has been working with the severely wounded in England in the warâ€™s wake, is asked to carry out a personal mission in Paris for a Matron at the London headquarters of The Queen Alexandraâ€™s. Bess is facing decisions about her own future, even as she searches for Lawrence Minton. When she finally locates him, instead of the intelligent, ambitious officer she expects, she finds a bitter and disturbed man who has abdicated his duties at the Peace Conference and is well on his way toward an addiction to opiates. Indeed, he tells her that he doesnâ€™t care if he lives or dies, he only wants oblivion. But what has changed him? What is it that haunts him? It seems the truth is buried so deep in his mind that he can only relive it in wild nightmares. When Minton goes missing, bent on suicide, Bess must race to unlock his past before he succeeds. Reluctant to trust an officer in Mintonâ€™s regiment, a man with secrets of his own, and uncertain of the loyalties of Matronâ€™s friends in Paris, Bess must rely on her own instincts and experienceâ€”and sometimes in desperation on a stranger who claims he never met Minton. Could whatever happened to Minton in Paris somehow be connected to his war? And why did he not kill Bess when he had the chanceâ€”then later, viciously attack her without warning? What is destroying Lieutenant Minton? Or is it who? And what horror will she have to confront, if she is to save him? In this, the eleventh novel in the award-winning Bess Crawford series, New York Times bestselling author Charles Todd delivers a rich and atmospheric portrait that illuminates the cost of war on human livesâ€”the lingering pain and horror that no peace, no matter how earned, can assuage. Review â€œAs always, Toddâ€™s intense feelings for the traumatized survivors of war make one motherâ€™s son the broken hero of an entire generation of lost souls.â€ ( New York Times Book Review on A Cruel Deception) "As always, the mother-son writing team of Charles Todd does a magnificent job with atmosphere and dialogue, all while keeping their good-hearted heroine one step (but only one) ahead of the bad guys .â€ ( BookPage on A Cruel Deception) â€œSensitive, beautifully written, disconcertingly familiar.â€ ( Kirkus Reviews on A Cruel Deception) â€œAs with all other Bess Crawford mysteries, this one is historically accurate, entertainingly written, and thoroughly enjoyable.â€Â  ( New York Journal of Books on A Cruel Deception) "As usual, Todd mixes historical verisimilitude with exemplary character design and sharp plotting. Another fine entry in this popular series.â€ ( Booklist on A Cruel Deception) "Bess is among the most compassionate and intelligent characters, whose observations on life and people are advanced for the era in which she lives. . . . In A Cruel Deception, Todd again delivers a sensitive look at how people survive war." ( The Sun-SentinelÂ (Florida) on A Cruel Deception) â€œTerrific . . . A Cruel Deception shows that there are still plenty of stories left for Bess Crawford, and I cannot wait to see what happens next." ( Book Reporter on A Cruel Deception) About the Author Charles Todd is theÂ New York TimesÂ bestselling author of the Inspector Ian Rutledge mysteries, the Bess Crawford mysteries, and two stand-alone novels. A mother-and-son writing team, they li