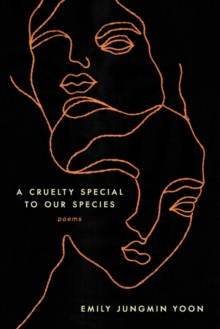 A CRUELTY SPECIAL TO OUR SPECIES: POEMS

Product Description A piercing debut collection of poems exploring gender, race, and violence from a sensational new talent In her arresting collection, urgently relevant for our times, poet Emily Jungmin Yoon confronts the histories of sexual violence against women, focusing in particular onÂ KoreanÂ so-called â€œcomfort women,â€ women who were forced into sexual labor in Japanese-occupied territories during World War II. In wrenching language, A Cruelty Special to Our Species unforgettably describes the brutalities of war and the fear and sorrow of those whose lives and bodies were swept up by a colonizing power, bringing powerful voice to an oppressed group of people whose histories have often been erased and overlooked. â€œWhat is a body in a stolen country,â€ Yoon asks. â€œWhat is right in war.â€ Moving readers through time, space, and different cultures, and bringing vivid life to the testimonies and confessions of the victims,Yoon takes possession of a painful and shameful history even while unearthing moments of rare beauty in acts of resistance and resilience, and in the instinct to survive and bear witness. Review â€œWith searing witness and quietly prodigious song here is a volume that speaks sharp truths to those who would wish the forgetting of one of the darkest hours of humanity. A lovely, moving, and ultimately devastating book.â€ (Chang-rae Lee) â€œEmily Jungmin Yoon finds language to convey its horror and violenceâ€”painfully and unsparingly, but somehow also with a delicacy, precision, and attention that does not impose the true (literal) brutality on the reader, which makes these poems all the more shocking and unforgettable.â€ (Amy Tan) â€œEmily Jungmin Yoonâ€™s...un-erring lyrical sense, evident in all her poems, including these meditations on slavery and rape, allow her to transcend the limits of language itself. From her refusal of dismissive epiphany to the profound linguistic insights that underscore these rare searching poems, beauty occurs.â€ (Carol Muske-Dukes) â€œ[A] deeply reverent debut collection. . .Â [Yoon] writes these poems in her second language, an English in which she takes mindful, absorbing residence while her â€˜native tongue is a codeâ€™ that orchestrates with brimming precision what can be imagined, mourned, remembered, invented and haunted.â€ (Eleanor Chai) â€œThe poems...are miracles of clarity and precision that are all the more miraculous because their strength, piercing lyricism, and transparent humanity never quaver or falter or step back for a second.â€ (Vijay Seshadri) â€œAÂ heart-wrenching debut...Yoonâ€™s work is compelling in part because it shows the importance of understanding history and its enduring impact.â€ ( Washington Post) From the Back Cover From the chief Washington correspondent for the New York Times, a richly detailed, news-breaking look at the unprecedented political fight over Antonin Scaliaâ€™s Supreme Court vacancy and the seemingly irreversible dysfunction it triggered across all three branches in the nationâ€™s capitalâ€”ultimately delivering us Trump, Gorsuch, and Kavanaugh The embodiment of American conservative thought and jurisprudence, Antonin Scalia cast an expansive shadow over the Supreme Court for three decades. His death at a Texas hunting resort in February 2016 created a dilemma for Republican leadership faced with the prospect of yet another Obama Supreme Court nominee, this time one who could tip the ideological balance of the court and alter the course of American history. In Confirmation Bias, Carl Hulse tells an exclusive account of the rush of events following Scaliaâ€™s death, including Mitch McConnellâ€™s extraordinary snap decision to deny President Obamaâ€™s nominee so much as a hearing, let alone a vote. The author recounts the unsuccessful Democratic effort to break the Republican blockade on behalf of Merrick Garland, a failure that allowed Donald Trump to exploit the vacancy to entice evangelicals and other leery Republicans to rally support and deliver him th