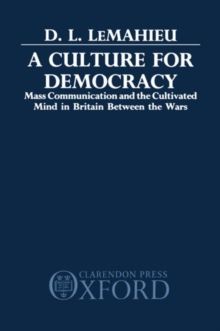 A CULTURE FOR DEMOCRACY: MASS COMMUNICATION AND THE CULTIVATED MIND IN BRITAIN BETWEEN THE WARS

The development of popular national daily newspapers, the cinema, the radio, the gramophone, and other forms of mass entertainment in early 20th-century Britain threatened to upset traditional patterns of British culture and engendered a determined opposition among writers, artists, intellectuals, and others. This book explores the often antagonistic relationship between commercial and Ã©lite culture during this period. LeMahieu traces the rise of commercial culture, where success was measured by popularity rather than aesthetic merit, explores the responses of the cultivated elites, and charts the gradual emergence of a common culture during the interwar period.