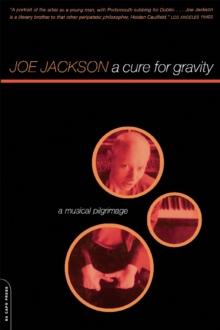 A CURE FOR GRAVITY: A MUSICAL PILGRIMAGE

Product Description "Part memoir, part discourse on the art of music. . . . This is an intelligent, thoughtful look into the mind of an artist."--New York Times Book Review Since the release of his first best-selling album Look Sharp in 1979, Joe Jackson has forged a singular career in music through his originality as a composer and his notoriously independent stance toward music-business fashion. He has also been a famously private person, whose lack of interest in his own celebrity has been interpreted by some as aloofness. That reputation is shattered by A Cure for Gravity, Jackson's enormously funny and revealing memoir of growing up musical, from a culturally impoverished childhood in a rough English port town to the Royal Academy of Music, through London's Punk and New Wave scenes, up to the brink of pop stardom. Jackson describes his life as a teenage Beethoven fanatic; his early piano gigs for audiences of glass-throwing skinheads; and his days on the road with long-forgotten club bands. Far from a standard-issue celebrity autobiography, A Cure for Gravity is a smart, passionate book about music, the creative process, and coming of age as an artist. Ralph J. Gleason Music Book Award Finalist Review "A portrait of the artist as a young man, with Portsmouth subbing for Dublin....Joe Jackson is a literary brother to that other peripatetic philosopher, Holden Caulfield." -- Los Angeles Times "An antidote to the chest-puffing fantasy of many rock memoirs." -- Billboard "Clear, precise, and often witty.... Jackson certainly has the talent to be a literary star." -- San Francisco Chronicle "Straightforward, self-effacing and wonderfully detailed....Jackson is as adept on the page as he is between the grooves." -- T.C. Boyle, author of The Road to Wellville "[An] intelligent, thoughtful look into the mind of an artist." -- New York Times Book Review About the Author Joe Jackson's internationally bestselling albums include Look Sharp, Night and Day, and Body and Soul. He has also composed music for film, video, and television. A graduate and now a Fellow of the Royal Academy of Music, he divides his time between New York City and Portsmouth, England.