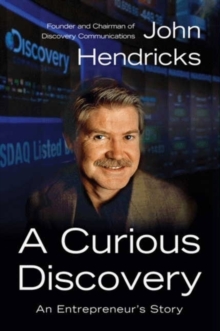 A CURIOUS DISCOVERY: AN ENTREPRENEUR'S STORY

Product Description In A Curious Discovery, media titan John Hendricks tells the remarkable story of building one of the most successful media empires in the world, Discovery Communications. John Hendricks, a well-respected corporate leader and brand builder, reveals that his professional achievements would not have been possible without one crucial quality that has informed his life since childhood: curiosity.Â  This entrepreneurâ€™s story takes you behind the scenes of some of the networkâ€™s most popular shows and greatest successes, and imparts crucial lessons from the networkâ€™s setbacks. With insights, anecdotes, photographs, and real-world wisdom, A Curious Discovery is more than a powerful autobiography and corporate history: It also a valuable primer for business innovators and entrepreneurs. From Booklist Hendricks is the founder and chairman of Discovery Communications, a global mass-media entertainment company consisting of 28 network brands including the flagship Discovery Channel, Animal Planet, TLC, and the Science Channel. Inspired by such classic television documentaries as Walter Cronkiteâ€™s The Twentieth Century and Carl Saganâ€™s Cosmos, Hendricks boldly set out to create an all-educational cable network to air documentary, nature, and science programming 24 hours a day. That was in 1982, when cable was still an unproven medium. How he went from a $100,000 second mortgage on his home and the brink of bankruptcy to a $23-billion media empire is one of the most engaging entrepreneurial stories youâ€™re likely to read and also one of the most personal. From his anecdotes about growing up in 1960s segregated Alabama to his recounting of a courting by the enigmatic Ted Turner, Hendricksâ€™ humility, sincerity, and prescience shine through. Along the way, you may even get a behind-the-scenes look at one of your favorite shows, such as Mythbusters, Shark Week, American Chopper, How Itâ€™s Made, and Planet Earth. --David Siegfried Review â€œJohn Hendricksâ€™ story is quintessentially American, and yet he ended up bringing to millions the diversity and excitement of the world. In A CURIOUS DISCOVERY he tells a terrific story rooted in the 20th Century but exploding into the 21st.â€ (Robert Redford) â€œA CURIOUS DISCOVERY is a fascinating look at our ever-evolving media landscape and a practical guide for purpose-driven, made-in-America prosperity.â€ (Bill Clinton) From the Back Cover A Curious Discovery is one of the most complete and honest accounts of entrepreneurship and the building of a giant corporation ever written. Media visionary John Hendricks takes the reader on his unforgettable journey from founding Discovery Communications over a breakfast table to establishing the organization as the world's largest provider of television content. Hendricks tells this remarkable storyâ€”from the triumphs to the failuresâ€”with unflinching candor. In the process, he shares what he's learned over the past three decades, from the obstacles and successes of the early years to the very real and very different challenges that exist today. The result is not only a powerful autobiography and corporate history, but also a valuable primer for all budding entrepreneurs. A Curious Discovery goes behind the scenes, telling the fascinating stories of some of the network's most popular shows: Deadliest Catch, Mythbusters, The Crocodile Hunter, Planet Earth, Dirty Jobs, and Trading Spaces. It also draws lessons from the network's setbacks, including the unsuccessful collaboration with the New York Times, and explains the company's high-profile decisions, such as Discovery's partnership with Oprah Winfrey and OWN: The Oprah Winfrey Network. Hendricks reveals that his achievements would not have been possible without one crucial factor that has informed his life since childhood: curiosity. Ever eager to learn, to uncoverâ€”even to take enormous risksâ€”his questioning mind has guided his development and success, and continues to shape his outlook toda