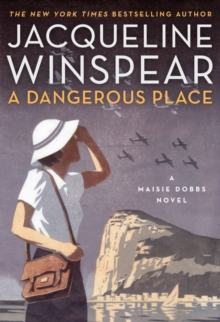 Product Description Four years after she set sail from England, leaving everything she most loved behind, Maisie Dobbs at last returns, only to find herself in a dangerous place . . . Â  In Jacqueline Winspearâ€˜s Â powerful story of political intrigue and personal tragedy, a brutal murder in the British garrison town of Gibraltar leads Maisie into a web of lies, deceit, and peril. Spring 1937. In the four years since she left England, Maisie Dobbs has experienced love, contentment, stabilityâ€”and the deepest tragedy a woman can endure. Now, all she wants is the peace she believes she might find by returning to India. But her sojourn in the hills of Darjeeling is cut short when her stepmother summons her home to England; her aging father Frankie Dobbs is not getting any younger. But on a ship bound for England, Maisie realizes she isnâ€™t ready to return. Against the wishes of the captain who warns her, â€œYou will be alone in a most dangerous place,â€ she disembarks in Gibraltar. Though she is on her own, Maisie is far from alone: the British garrison town is teeming with refugees fleeing a brutal civil war across the border in Spain. Yet the danger is very real. Days after Maisieâ€™s arrival, a photographer and member of Gibraltarâ€™s Sephardic Jewish community, Sebastian Babayoff, is murdered, and Maisie becomes entangled in the case, drawing the attention of the British Secret Service. Under the suspicious eye of a British agent, Maisie is pulled deeper into political intrigue on â€œthe Rockâ€â€”arguably Britainâ€™s most important strategic territoryâ€”and renews an uneasy acquaintance in the process. At a crossroads between her past and her future, Maisie must choose a direction, knowing that England is, for her, an equally dangerous place, but in quite a different way. Review â€œWith clarity and economy, Winspear lays the historical groundworkâ€¦.The setting matters, but what may matter more is the lovely, sometimes poetic way Winspear pushes her heroine forwardâ€¦.May she shine on the literary scene for many books to come.â€ ( USA Today, 3.5 out of 4 stars) â€œA gripping and moving story, filled with fully realized characters and spare but stylish proseâ€¦.As always, Maisie?one of the most complex and admirable characters in contemporary fiction?fulfills expectations. And Winspear continues to dazzle as she once again excels in and transcends the genre.â€ ( Richmond Times-Dispatch) â€œThis eleventh entry in the Maisie Dobbs series, with enough backstory to stand alone, shows the same meticulous research that grounds these books so firmly in their time and place, along with moving life changes that further humanize the intrepid protagonist. Another winner from Winspear.â€ ( Booklist, starred review) â€œThe latest installment of Jacqueline Winspearâ€™s consistently interesting seriesâ€¦.[Maisieâ€™s] drawn into a climate of political intrigue that repels her-but keeps the rest of us avidly reading.â€ (Marilyn Stasio, New York Times Book Review) â€œMaisie would be interesting enough as a combination psychologist, empath and detective, but Winspear endows her with a rich backstoryâ€¦.With the clouds of war gathering, we can only expect that the British government will have uses for such a clever and effective woman....Interesting times ahead.â€ (Bobbi Dumas, NPR Books) â€œA welcome addition to the seriesâ€¦.Itâ€™s an understatement to note that Ms. Winspear, as usual, has made excellent use of her background research.â€ (Nora Levine, HeadButler.com) â€œWinspear elegantly weaves historical events with Maisieâ€™s own suffering?the bombing of Guernica is particularly well-done?all while constructing an engaging whodunit. Fans of this long-running series will welcome Maisieâ€™s return in this 11th installment while feeling the pain of her losses as deeply as if they were their own.â€ ( Kirkus) From the Back Cover â€œAnother winner from Winspear.â€â€”Booklist (starred review) Spring 1937. In the four years since she left England, Maisie Dobbs has experienced love, contentment, stabil