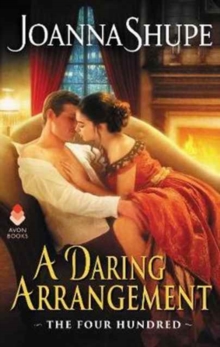 Product Description "An intelligent, sexy romp!"Â  -- EW.com Â  Set in New York City's Gilded Age, Joanna Shupe's Avon debut introduces an English beauty with a wicked scheme to win the man she loves--and the American scoundrel who ruins her best-laid plans... Lady Honora Parker must get engaged as soon as possible, and only a particular type of man will do. Nora seeks a mate so abhorrent, so completely unacceptable, that her father will reject the match--leaving her free to marry the artist she loves. Who then is the most appalling man in Manhattan? The wealthy, devilishly handsome financier, Julius Hatcher, of course.... Â  Julius is intrigued by Nora's ruse and decides to play along. But to Nora's horror, Julius transforms himself into the perfect fiancÃ©, charming the very people she hoped he would offend. It seems Julius has a secret plan all his own--one that will solve a dark mystery from his past, and perhaps turn him into the kind of man Nora could truly love. Â  "Nothing makes me happier than a new book from Joanna Shupe!"Â  -- New York Times bestselling author Sarah MacLean Review An Amazon Best Book of the Month! A Goodreads Best Romances of the Month! Winner! NJRW's Golden Leaf Award for Best Historical Nominated for an RT Reviewer's Choice Award "An intelligent, sexy romp!" --EW.com "Enchanting! Shupe's unique talents shine in her start to The Four Hundred series as her sparkling light humor mixes with poignancy, danger, heated chemistry and delightful dialogue." --RT Book Reviews, 4 1/2 Stars, TOP PICK! "Shupe continues to raise the bar for Gilded Age romance with the first book in a promising new series." --Kirkus Reviews "Shupe (the Knickerbocker Club series) takes readers back to the Gilded Age of 19th-century New York in the enjoyable debut of her Four Hundred series...Shupe has expertly developed her winning protagonists to reveal great depth of character." --Publishers Weekly "Quite possibly (Shupe's) best novel yet! A great read, packed with wonderful dialogue, strongly-drawn secondary characters, a well-developed romance and sensual love scenes." --All About Romance "A young lady's outrageous plan to marry the man of her dreams backfires most effectively in this steamy romance that takes excellent advantage of a seldom-used New York Gilded Age setting." --Library Journal About the Author Joanna Shupe has always loved history, ever since she saw her first Schoolhouse Rock cartoon. In 2013, she won Romance Writers of America's prestigious Golden HeartÂ® Award for Best Historical. Since then, her books have appeared on numerous yearly â€œbest ofâ€ lists, including Publishers Weekly, The Washington Post, Kirkus Reviews, Kobo and BookPage. She lives in New Jersey with her two spirited daughters and dashing husband.Â  >