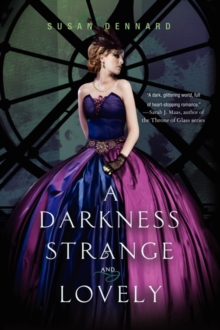 Product Description Perfect for fans of Libba Bray's The Diviners and Cassandra Clare's The Infernal Devices series, this spellbinding sequel to Something Strange and Deadly delivers a mix of supernatural forces and intense romance, set against the enchanting backdrop of nineteenth-century Paris. With her brother dead and her mother insane, Eleanor Fitt is alone. Even the Spirit-Huntersâ€”Joseph, Jie, and the handsome Danielâ€”have fled to Paris. So when Eleanor hears the vicious barking of hounds and sees haunting yellow eyes, she fears that the Dead, and the necromancer Marcus, are after her. To escape, Eleanor boards a steamer bound for France. There she meets Oliver, a young man who claims to have known her brother. But Oliver harbors a dangerous secret involving necromancy and black magic that entices Eleanor beyond words. If she can resist him, she'll be fine. But when she arrives in Paris, she finds that the Dead have taken over, and there's a whole new evil lurking. And she is forced to make a deadly decision that will go against everything the Spirit-Hunters stand for. In Paris, there's a price for this darkness strange and lovely, and it may have Eleanor paying with her life. Review â€œA dark, glittering world, full of unforgettable characters, swashbuckling action, and heart-stopping romance. Susan Dennardâ€™s books now have a permanent place on my All-Time Favorites shelf!â€ (Sarah J. Maas, author of The Throne of Glass series) Praise for SOMETHING STRANGE AND DEADLY (;) â€œThrilling, charming, and dark, Something Strange and Deadly is a delicious sandwich of harmonious flavors. I fell for Daniel, I soaked in the zombie mayhem with glee, I delighted in the steampunk fashion and gadgetry. If you enjoyed The Clockwork Angel, youâ€™ll love this. Fantastical fun.â€ (Marie Lu, author of the Legend trilogy) â€œMystery, romance, humor, action, a sure-fire setting: Dennard delivers.â€ ( Kirkus Reviews) â€œFrom the first page, readers will be awakened to an 1876 Philadelphia replete with animated corpses, irresistible romance and a game of intrigue. Those who enjoy Cassandra Clareâ€™s the Infernal Devices series will be spellbound by Dennardâ€™s macabre and impressive debut.â€ (Shelf Awareness) â€œDebut author Dennard deftly weaves together a vast plot blending historical fiction, horror, romance, and mystery. A roaring-and addictive-gothic world.â€ ( Publishers Weekly) â€œThis debut novel is quite compelling and features a plot that moves at breakneck speed. The plot is full of action, betrayal, and romance.â€ (Voice of Youth Advocates (VOYA)) â€œA wonderfully brisk pace sweeps readers into an intriguing mystery. Eleanor serves as a highly entertaining guide and readers will find themselves settling in among the undead just fine.â€ (Bulletin of the Center for Childrenâ€™s Books) From the Back Cover Darkness has come to the City of Light. . . . After helping the Spirit-Hunters save Philadelphia from the walking Dead, Eleanor Fitt must now face the things she couldn't stop: her brother's death, her mother's deteriorating health, and the sting of unrequited love. But when she encounters the necromancer Marcus again, she must seek the help of Joseph, Jie, and the gorgeous Danielâ€”who have all fled to Paris. On her way to France, Eleanor meets Oliver, who claims to have known her brother. Though friendly, Oliver harbors a secret involving black magic that entices Eleanor. Trying to resist it, she rejoins the Spirit-Hunters in hopes of stopping Marcus. But the Dead have taken over Paris, and there's a whole new evil lurking. Eleanor is now forced to make a dangerous decisionâ€”and her choice could mean life or death for everyone. About the Author Susan Dennard is a writer turned marine biologist turned writer again. The Something Strange and Deadly trilogy is her debut. Among the traits she shares with her heroine Eleanor are a weakness for Shakespeare quotes, a healthy appetite for baked goods, and an insatiable curiosity. Sadly, Susan does not