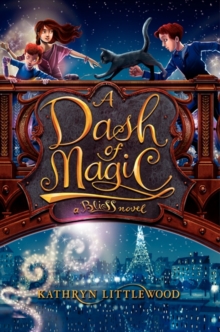 Product Description This second book in the acclaimed Bliss trilogy mixes the down-home heart-punch of Ingrid Law's Newbery Honor Book Savvy, the always-on-the-edge-of-chaos comedy of Cheaper by the Dozen, and a humorous magic all its own to create a thoroughly original confection to please every reader's sweet tooth! The Bliss family's magical Cookery Booke was stolen by evil Aunt Lily at the end of Bliss, the first novel in the series. Now twelve-year-old Rosemary has a chance to win it back: she challenges her aunt to an Iron Chef-style international baking competition in Paris. But the only way to beat the cheating Aunt Lily is to gather magical ingredients of her own. Together with her brothers and their talking cat and mouse, Rose races across Parisâ€”from the Eiffel Tower to the Cathedral of Notre Dame to the Mona Lisa in the Louvre Museumâ€”to gather what she needs to out-bakeâ€”and out-magicâ€”her conniving aunt. If Rose wins, the cherished Cookery Booke will return to her family where it belongs. If she losesâ€”well, the consequences are too ugly to think about. . . . From School Library Journal Gr 3-6-In this sequel to Bliss (HarperCollins, 2012), Littlewood continues her frothy tale of the magical baking family as they enter a high-stakes culinary competition in Paris to win back their magic recipe book from their evil relative, Lily Le Fay. It is 12-year-old Rose and her siblings who take on the task of finding the ingredients they need, such as the wish of a ghost and the blush of a queen, as they try to outwit and outbake Lily, who has bewitched everyone with her enchanted "Magic Ingredient." Brimming with lighthearted fun, where even the gargoyles turn out to be friendly, this action-packed fantasy, celebrating the courage and ingenuity of children and the wholesomeness of simple baking, will be enjoyed most by those who have read the first book. Travel buffs will like the way the action takes place in and around Parisian tourist attractions. Characterization is light and easy, with some insight into Rose's feelings. Newcomers to the series will need some patience while they get up to speed. The ending suggests a sequel.-Sue Giffard, Ethical Culture Fieldston School, New York City?(c) Copyright 2013. Library Journals LLC, a wholly owned subsidiary of Media Source, Inc. No redistribution permitted. Review â€œReaders will savor this latest Bliss family adventure...Fantastic fantastical fare.â€ (Kirkus Reviews (starred review)) â€œBrimming with lighthearted fun.â€ (School Library Journal) From the Back Cover The Heat Is On Rosemary Bliss will do anything to get back her family's magical Cookery Booke. That's why she challenges Aunt Lily to an international baking competition in Paris: If Rose wins, Lily agrees to return the Cookery Booke that she stole. If Rose loses . . . well, the consequences are too ugly to think about. But Lily isn't playing fairâ€”she's using a magical ingredient to cheat. The only way for Rose to compete is for her to find magical ingredients of her own. Together with her long-lost grandpa, his sarcastic talking cat, and a turncoat French mouse, Rose and her brothers race around Paris to find essentialâ€”and elusiveâ€”magical ingredients that will help her outbakeâ€”and outmagicâ€”her conniving aunt. She has to win or the Bliss Cookery Booke will be lost to her family forever. This second helping in Kathryn Littlewood's Bliss series combines hilarious magic and daring adventure to make one delectable reading treat. About the Author Kathryn Littlewood is a writer, actress, comedienne, and bon vivant who lives in New York City, works often in Los Angeles, and has a sweet tooth for pain au chocolat and sweet novels for middle-grade readers. This, her third novel, joins Bliss and A Dash of Magic in the Bliss trilogy. Erin McGuire is an illustrator of picture books and middle grade novels, including Breadcrumbs by Anne Ursu, the Nancy Drew Diaries series, and Sleeping Beauty by Cynthia Rylant. When