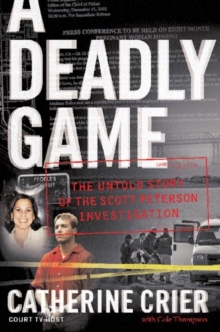 A DEADLY GAME: THE UNTOLD STORY OF THE SCOTT PETERSON INVESTIGATION

Product Description Filled with newsbreaking revelations â€“ the definitive journalistic account of the Laci Peterson murder investigation . . . and of the sociopathic Scott Peterson's journey from philandering to murder to Death Row. Catherine Crier has been covering the Peterson case since Laci Peterson was first reported missing from her home on 24 December 2002. Crier, a former judge and one of television's most popular legal analysts, was among the first to question the behaviour of Laci's husband, Scott Peterson. And with her network of journalistic sources, Crier was soon able to penetrate the core of the police investigation that followed â€“ gaining access to a huge and revealing body of police reports, wiretap transcripts of unreported conversations of Scott's, photographic evidence, and other exclusive materials. Drawing on these resources â€“ and on extensive interviews with key witnesses and both of the lead investigators on the case â€“ Crier has written this astonishingly detailed and intimate look at the most unforgettable murder case in America since that of O.J. Simpson. Thoroughly engrossing yet highly disturbing, Catherine Crier's A Deadly Game will make news â€“ and create an indelible portrait of a sociopathic killer. From Publishers Weekly After the seemingly never-ending media coverage of pregnant Laci Peterson's Christmas Eve 2002 disappearance and husband Scott's subsequent arrest, trial, conviction and death-penalty sentence for her murder, it's hard to believe anything about this notorious case could still be "untold." But Court TV anchor Crier and co-author Thompson's encyclopedic tome includes never-before-released transcripts of conversations between Scott and others (which don't significantly impact one's understanding of the case, however) and a 38-page appendix of photos, documents and other police evidence. Although much of the information in this book has been reported previously or revealed at trial, anyone looking for a comprehensive overview of the case will find it here. The authors chart not only the police investigation and trial but the personal and family history of Scott and Laci. A more balanced examination of the case is all that's missing to make this book really stand out. Up front, Crier states that since the first days of the case, she felt certain that Scott was a sociopath responsible for his wife's disappearance, and throughout the book, she demonstrates how and why. Given Scott's behavior in the weeks prior to and immediately after Laci's disappearance, not to mention all the lies he told to police, family and friends, she's not exactly going out on a limb. Although few people would doubt Scott's guilt, the whole book is very pro-police-it's even dedicated "To all those who protect and serve." Had the authors started from a presumption of innocence and turned a critical eye on the investigation, which yielded more circumstantial than solid forensic evidence, the book would have been more compelling, but its thoroughness will draw many readers nonetheless. 12 pages of color photos. Copyright Â© Reed Business Information, a division of Reed Elsevier Inc. All rights reserved. About the Author Catherine Crier is the host of Court TV's Catherine Crier Live. A distinguished attorney, legal analyst, and the youngest state judge ever to be elected in Texas, Crier has received an Emmy Award for investigative journalism and the DuPont-Columbia Journalism Award. Also the author of the New York Times bestsellers A Deadly Game and The Case Against Lawyers, Crier lives in Westchester County, New York.