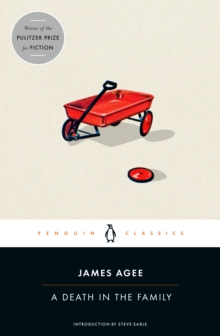 A DEATH IN THE FAMILY (PENGUIN CLASSICS)

Product Description The classic American novelâ€”winner of the 1958 Pulitzer Prizeâ€”now re-published for the 100th anniversary of James Ageeâ€™s birthOne ofÂ Timeâ€™s All-Time 100 Best NovelsA Penguin Classic Published in 1957, two years after its author's death at the age of forty-five,Â  A Death in the FamilyÂ remains a near-perfect work of art, an autobiographical novel that contains one of the most evocative depictions of loss and grief ever written. As Jay Follet hurries back to his home in Knoxville, Tennessee, he is killed in a car accidentâ€”a tragedy that destroys not only a life, but also the domestic happiness and contentment of a young family. A novel of great courage, lyric force, and powerful emotion,Â  A Death in the FamilyÂ is a masterpiece of American literature. Review Winner of the Pulitzer Prize for Fiction "[James Agee's words] are so indelibly etched someplace inside of me that I couldn't reach to rub them out even if I wanted to. And I never want to."Â  â€”Steve Earle, from the IntroductionÂ  "The work of a writer whose power with English words can make you gasp."Â  â€”Alfred Kazin,Â The New York Times Book Review "It is, in the full sense, poetry. . . . The language of the book, at once luminous and discreet . . . remains in the mind." â€”The New Republic "Wonderfully alive."Â  â€”The New Yorker Â  â€œA Death in the FamilyÂ remains one of the most beautifully written of all American novels. James Ageeâ€™s talent was both luxuriant and precise, and the opening sequence is still one of the finest prose poems in our language. He is one of those writers who cause other writers to shiver with pure pleasure.â€ â€”Pat Conroy Â  â€œPeople I know who readÂ  A Death in the FamilyÂ forty years ago still talk about it. So do I. It is a great book, and Iâ€™m happy to see it done anew.â€ â€”Andre Dubus Â  â€œFor as long as fiction is read, James Ageeâ€™sÂ  A Death in the FamilyÂ stands as an American masterpiece. There is no stronger, more moving document in our literature than this account of a fatherâ€™s sudden death in the early years of our century. Here are the full spectrum of emotion and resonance, the tensile, perfectly nuanced language, the prayerful inquiry into identity itself, and characters so perfectly rounded that they exist in every specificity of inquiry, acute awareness, dumb love, and sensual arrest. This book has been my Bible; may it bless new generations of readers.â€ â€”Jayne Anne Phillips About the Author James Agee (1909Â­â€“1955) is the author of Let Us Now Praise Famous Men, the renowned study of Alabama sharecroppers during the Depression. Born in Tennessee, he died two years before the publication of A Death in the Family, his most famous work. Â  Steve Earle (introducer) is an American singer-songwriter, political activist, and author of the short story collection Doghouse Roses. Born in Virginia, he lives with his wife in New York City. Excerpt. Â© Reprinted by permission. All rights reserved. Chapter 1 AT SUPPER THAT NIGHT, as many times before, his father said, â€œWell, spose we go to the picture show.â€ â€œOh, Jay!â€ his mother said. â€œThat horrid little man!â€ â€œWhatâ€™s wrong with him?â€ his father asked, not because he didnâ€™t know what she would say, but so she would say it. â€œHeâ€™s so nasty!â€ she said, as she always did. â€œSo vulgar! With his nasty little cane; hooking up skirts and things, and that nasty little walk!â€ His father laughed, as he always did, and Rufus felt that it had become rather an empty joke; but as always the laughter also cheered him; he felt that the laughter enclosed him with his father. They walked downtown in the light of mother-of-pearl, to the Majestic, and found their way to seats by the light of the screen, in the exhilarating smell of stale tobacco, rank sweat, perfume and dirty drawers, while the piano played fast music and galloping horses raised a grandiose flag of dust. And there was William S. Hart with both guns blazing and his long, horse face and his long, hard lip, and the great country ro