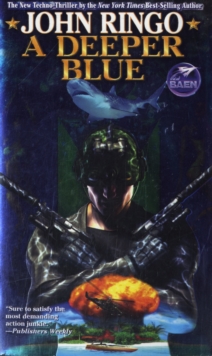 Product Description Sequel to Ghost, Kildar, Choosers of the Slain and Unto the Breach. Heart-sick over the deaths of so many of his Keldara followers, and one in particular, former SEAL Mike Harmon, hero of Ghost, Kildar and Choosers of the Slain, decides to sit this one out. WMDs headed for the US no longer matter to the Kildar. But when his best friend and intel specialist both are seriously wounded in an ambush aimed at him, the Kildar gets his gameface back on. Mike has always said that he's not a nice guy, and he's about to prove it to a boatload of terrorists and Colombian drug dealers. Set in the Bahamas and Florida Keys, A Deeper Blue is a fast moving thriller that never slows down from the first page. With the return of some old faces, the action-packed novel proves, once again, the adage that sometimes it takes some very bad people to do good things. About the Author John RingoÂ brings fighting to life. He is the creator of the Posleen Wars series, which has become aÂ  New York TimesÂ best-selling series withÂ over one million copies in print. The series containsÂ  A Hymn Before Battle,Â  Gust Front,Â  When the Devil Dances,Â  Hellâ€™s Faire,Â and Eye of the Storm. In addition, Ringo has penned the Council War series. Adding another dimension to his skills, Ringo created nationally best-selling techno-thriller novels about Mike Harmon ( Ghost,Â  Kildar,Â  Choosers of the Slain,Â  Unto the Breach,Â  A Deeper Blue,Â and, with Ryan Sear,Â  Tiger by the Tail). His techno-thrillerÂ  The Last CenturionÂ was also a national bestseller. A more playful twist on the future is found in novels of the Looking-Glass series:Â  Into the Looking Glass,Â  Vorpal Blade,Â  Manxome Foe,Â andÂ  Claws That Catch, the last three in collaboration with Travis S. Taylor. His audience was further enhanced with four collaborations with fellowÂ  New York TimesÂ best-selling author David Weber:Â  March Upcountry, Â March to the Sea,Â  March to the StarsÂ andÂ  We Few. There are an additional seven collaborations from the Posleen series:Â  The Hero, written with Michael Z. Williamson,Â  Watch on the Rhine,Â  Yellow EyesÂ andÂ  The Tuloriad, all written with Tom Kratman, and theÂ  New York TimesÂ best sellerÂ  Callyâ€™s WarÂ and its sequelsÂ  Sister TimeÂ andÂ  Honor of the Clan, all with Julie Cochrane. His science-based zombie apocalypse Black Tide Rising series includesÂ  Under a Graveyard Sky, To Sail a Darkling Sea, Islands of Rage and HopeÂ andÂ  Strands of Sorrow.Â A veteran of the 82nd Airborne, Ringo brings first-hand knowledge of military operations to his fiction.