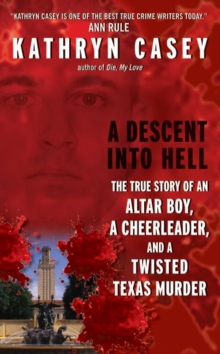 A DESCENT INTO HELL: THE TRUE STORY OF AN ALTAR BOY, A CHEERLEADER, AND A TWISTED TEXAS MURDER

Product Description Bright, attractive, and both from good families, University of Texas college student Colton Pitonyak and vibrant redhead Jennifer Cave had the world at their beckoning. Cave, an ex-cheerleader, had just landed an exciting new job, while a big-money scholarship to UT's prestigious business school lured Pitonyak to Austin. Yet the former altar boy had a dark, unpredictable streak, one that ensnared him in the perilous underworld of drugs and guns. When Jennifer failed to show up for work on August 18, 2005, her mother became frightened. Sharon Cave's search led to Colton's West Campus apartment, where Jennifer's family discovered a scene worthy of the grisliest horror movie. Meanwhile, Colton Pitonyak was nowhere to be found. A Descent Into Hell is the gripping true story of one of the most brutal slayings in UT historyâ€”and the wild "Bonnie and Clyde-like" flight from justice of a cold-blooded young killer and his would-be girlfriend, who claimed that her unquestioning allegiance to Pitonyak was "just the way I roll." Review "Kathryn Casey is one of the best in the true crime genre," --Ann Rule "Kathryn Casey joinsÂ Carlton Stowers as the premier chroniclers of Texas crime," --NYT bestselling author Gregg Olsen "Kathryn Casey stakes her claim as one of the best in the business," M. William Phelps, author of Love Her To Death About the Author ABOUT THE AUTHOR: Kathryn Casey is an award-winning, Houston-based journalist,Â the author of six highly acclaimed true crime books,Â and the creator of the Sarah Armstrong mystery series. SINGULARITY, the first in the Armstrong series, was included in Booklist's best crime novel debuts of 2009, and Library Journal chose the third in the series, THE KILLING STORM, for its list of the best books of 2010. Casey's protagonist is a Texas Ranger/profiler headquartered in Company A, Houston. In addition, Ann Rule calls Casey, "one of the best in the true crime genre." Â  Â Â Â Â Â Casey has appeared on Oprah, Oprah Winfrey's Oxygen Network, Court TV, Biography, Nancy Grace, E! Network, Investigation Discovery, and A&E.