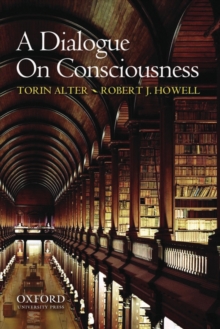 A DIALOGUE ON CONSCIOUSNESS

Product Description In recent years, the problem of consciousness has developed into one of the most important and hotly contested areas in the philosophy of mind. Many philosophers regard consciousness as an entirely physical phenomenon, yet it seems to elude scientific explanation. On the other hand, viewing consciousness as a nonphysical phenomenon brings up even larger issues. If consciousness is not physical, how can it be explained? Concise, up-to-date, and engaging, A Dialogue on Consciousness explores these issues in depth. It features two main characters, Tollens and Ponens--unemployed graduate students who secretly live in a university library--who bring the debate alive. Tollens and Ponens examine the most significant theories and arguments in the field, quoting key passages from both classic and contemporary texts. Their discussion encompasses an expansive and diverse range of ideas, from those that originated in the Enlightenment up to today's most current perspectives. The dialogue concludes with a consideration of the pros and cons of modern physicalist views and nonphysicalist alternatives. An extensive annotated list of suggested readings directs readers to the most relevant and helpful primary sources. An accessible and entertaining introduction to this complex issue, A Dialogue on Consciousness ideal for courses in philosophy of mind and consciousness. It also serves as an excellent supplement to introductory philosophy courses. Review "Alter and Howell's dialogue starts by making the basic puzzles of consciousness vivid and accessible. By the end it has led readers through a grand tour of many of the most central issues in the area, bringing them close to the leading edge of current thought. Alter and Howell have both made significant contributions to this area themselves, so their discussion is philosophically rich. At the same time, it is a pleasure to read."--David Chalmers, Director, Centre for Consciousness, Australian National University, and author of The Conscious Mind " A Dialogue on Consciousness is an elegant discussion of the problem of consciousness that would be appropriate for courses in the philosophy of mind and for generic introductions to philosophy. Once I began reading, I was hooked."--John Heil, Washington University in St Louis "I plan to use A Dialogue on Consciousness in my philosophy of mind course. It will engage the students and provide an excellent overview of the main issues, the main positions on them, and the main lines of argument."--Alfred Mele, William H. and Lucyle T. Werkmeister Professor of Philosophy, Florida State University About the Author Torin Alter is Associate Professor of Philosophy at the University of Alabama. He holds a Ph.D. in philosophy from U.C.L.A. . Robert J. Howell is Assistant Professor of Philosophy at Southern Methodist University. He holds a Ph.D. in philosophy from Brown University.