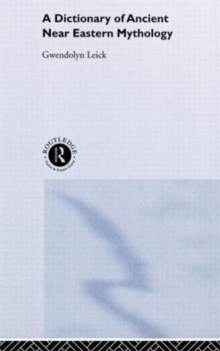 A DICTIONARY OF ANCIENT NEAR EASTERN MYTHOLOGY

Product Description The Dictionary of Ancient Near Eastern Mythology covers sources from Mesopotamia, Syro-Palestine and Anatolia, from around 2800 to 300 BC. It contains entries on gods and goddesses, giving evidence of their worship in temples, describing their 'character', as documented by the texts, and defining their roles within the body of mythological narratives; synoptic entries on myths, giving the place of origin of main texts and a brief history of their transmission through the ages; and entries explaining the use of specialist terminology, for such things as categories of Sumerian texts or types of mythological figures. Review 'Recommended for both college and university libraries, public libraries, theological libraries, and anyone interested in ancient history.' - Choice 'It is a straightforward attempt to summarize the mythology as written in the widely disseminated and often fragmentary texts that have been recovered.' - Booklist From the Back Cover The present volume is intended as a general reference work for students of religious studies, anthropology and oriental studies and attempts to make the subject accessible to a wider academic audience. In view of the immense number of publications, it does not claim to be exhaustive but concentrates on the better documented deities and narratives. References to unpublished texts are not included. The entries are organized in such a way as to set the subject in a broad historical context. About the Author Gwendolyn Leick is Lecturer at the University of Wales, College of Cardiff.