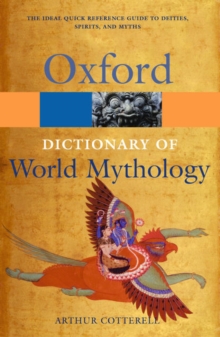 "I am Nature, the universal Mother, mistress of all the elements, sovereign of all things spiritual....I am worshipped in many aspects, known by countless names, and propitiated with all manner of different rites, yet the whole round earth venerates me." With these words, Isis--the mother goddess of Egypt--reveals herself to her devotee, Lucius Apuleius, in his novel The Golden Ass. Just as this great goddess claimed to be universal, mythology itself exists in all cultures around the globe and extends back to the beginnings of human civilization. Plato first coined the term mythologia to mean merely the telling of stories which contain legendary figures. Since his time, and especially now with the resurgent interest in myths, mythology has come to hold greater significance and power as a crucial element of civilization as a whole.
Written by a leading scholar of ancient civilizations, A Dictionary of World Mythology presents the powerful gods of Greece, Rome, and Scandinavia, the more mystical deities of Buddhist and Hindu India, and the stern spirits of the African and American continents together in one fascinating volume. Drawing upon hundreds of myths from around the globe, Arthur Cotterell not only reveals the vast differences in these civilizations, but also demonstrates the unity of mankind in its fundamental need for explanations of the unknown.
Cotterell divides the chief myths of the world into seven main sections--West Asia, South and Central Asia, East Asia, Europe, America, Africa, and Oceania. Traveling through this vast array of legendary riches, we encounter Gilgamesh, the tyrannical, semi-divine king of Babylonia, who, according to the Gilgamesh Epic, rejected Ishtar and thus caused the ravaging of the earth by Anu, the bull of heaven, and the death of his lifelong friend Enkidu. We learn that Dharma--the term meaning the doctrine of duties and rights of each caste in the Hindu religion's ideal society--wa