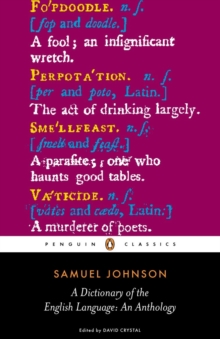 A DICTIONARY OF THE ENGLISH LANGUAGE: AN ANTHOLOGY (PENGUIN CLASSICS)

Product Description Surprising, colorful, and long-forgotten entries from the most famous dictionary in the history of the English languageÂ  Samuel Johnson's best-known work,Â  A Dictionary of the English LanguageÂ (1755), is the most influential and idiosyncratic lexicon ever written and was used by Jane Austen and Charles Dickens, the BrontÃ«s and the Brownings, Thomas Hardy and Oscar Wilde. This anthology includes 4,000 of the most representative, entertaining, and historically fascinating entries, covering subjects from fashion to food, science to sex, and given in full with original spelling and examples of usage from Shakespeare to Milton. For more than seventy years, Penguin has been the leading publisher of classic literature in the English-speaking world. With more than 1,700Â titles, Penguin Classics represents a global bookshelf of the best works throughout history and across genres and disciplines. Readers trust theÂ series to provide authoritative texts enhanced by introductions and notes by distinguished scholars and contemporary authors, as well as up-to-dateÂ translations by award-winning translators. About the Author Samuel Johnson (1709-1784) was an English poet, essayist, critic, journalist, lexicographer, and conversationalist, regarded as one of the outstanding figures of 18th-century life and letters. Â In addition to his Dictionary and the philosophical romance of THE PRINCE OF ABYSSINIA (1759, later known as RASSELAS), Johnson published essays in The Adventurer (1752-54) and The Idler (1758-60). He wrote a number of political articles, biographies of Sir Thomas Browne and Roger Ascham, and contributed to the Universal Chronicle. David Crystal is the Honorary Professor of Linguistics at the University of Wales, Bangor. He has published over 90 books and was awarded the OBE for services to the English language in 1995. He is the author of the Penguin Encyclopedia, the Penguin Factfinder, Stories of English and The Shakespeare Miscellany among other books published by Penguin.