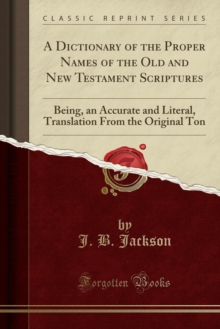 A DICTIONARY OF THE PROPER NAMES OF THE OLD AND NEW TESTAMENT SCRIPTURES: BEING, AN ACCURATE AND LITERAL, TRANSLATION FROM THE ORIGINAL TON (CLASSIC REPRINT)

by: Jackson, J. B.
Format: Paperback

Excerpt from A Dictionary of the Proper Names of the Old and New Testament Scriptures: Being, an Accurate and Literal, Translation From the Original Ton His plan was to arrange the names alphabetically, as spelled in our common English Bibles, attaching the meanings he had found, in the order in which he considered them to have weight, i.e., in the order in which he considered their sources to be authoritative. At the end of this part of his work, ere he went to press with his new Onomasticon, it occurred to him to experiment a little with some of the meanings he had secured, in order to see how they would work in the elucidation of some Of those passages which had first suggested the need of his researches. The result was as perplexing as it was curious; in some cases no less than twelve different, not to say opposite, meanings were given to the same name, by the same writer. But which, if any one of them, was the English equivalent of the Hebrew or Greek name under consideration? About the Publisher Forgotten Books publishes hundreds of thousands of rare and classic books. Find more at www.forgottenbooks.com This book is a reproduction of an important historical work. Forgotten Books uses state-of-the-art technology to digitally reconstruct the work, preserving the original format whilst repairing imperfections present in the aged copy. In rare cases, an imperfection in the original, such as a blemish or missing page, may be replicated in our edition. We do, however, repair the vast majority of imperfections successfully; any imperfections that remain are intentionally left to preserve the state of such historical works.